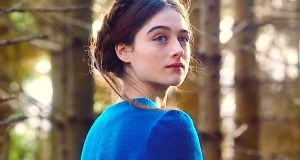 Raffey Cassidy in The Other Lamb

THE OTHER LAMB ★★★★☆
Directed by Malgorzata Szumowska. Starring Raffey Cassidy, Michiel Huisman, Denise Gough, Kelly Campbell, Eve Connolly, Isabelle Connolly. Mubi, 97 min
The increasingly impressive Raffey Cassidy, standout in both Vox Lux and The Killing of a Sacred Deer, stars as a teenager who knows no life other than that of the religious, patriarchal cult run by the Shepherd. Szumowska’s unsettling film, shot mostly in Wicklow, leaves a great deal unexplained. It is cautious in its characterisation. But the atmosphere of frontier decay and misogynistic oppression is sufficiently well-maintained to sustain attention throughout. This is not a film designed to shake off late-Covid unease. DC

A woman with anorexia (Brooke, strong) leaves a treatment facility to squabble with a recalcitrant daughter and a mother who doesn’t understand. The debut writer and director has studied the dynamics of the condition and put much of her research on the screen. At times one does yearn for a little more air, a little more distance, but the power of the tale cannot be denied. Many insufficient filmmakers have travelled down this road. The performance are all excellent in a stark, brutally honest film. DC

Zach Sobiech was an American singer-songwriter and musician from Minnesota who became a YouTube sensation in late 2012. Clouds, a song detailing his battle with cancer, became a global hit. This biopic of the star, who died in 2013, is a little spicier than most Disney+ content. (A girlfriend falls asleep in the hero’s bed!) Too sanitised for most real-life adolescents and too meandering at two hours-plus, it is a family film. But what kind of family will watch it? TB