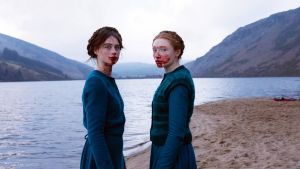 Raffey Cassidy and Ailbhe Cowley in The Other Lamb. Photograph: IFC Midnight

Film Title: The Other Lamb

It says something about the human animal’s need to follow that so many great filmmakers have tackled the subject of the devotional cult. The Wicker Man, Holy Smoke, The Master, Martha Marcy May Marlene, Midsommar: we’ve had everything from folk horror to thoughtful indie puzzler. (If you wish to archly append The Passion of the Christ list then I can’t stop you.)

Malgorzata Szumowska’s addition to the genre — an Irish co-production from Subotica Films — is at the more austere end of the cult-movie spectrum (we mean movies about cults, but The Other Lamb could end up satisfying both definitions of that phrase). It leaves a great deal unexplained. It is cautious in its characterisation. But the atmosphere of frontier decay and misogynistic oppression is sufficiently well maintained to sustain attention throughout. This is not a film designed to shake off late-Covid unease.

The increasingly impressive Raffey Cassidy, standout in both Vox Lux and The Killing of a Sacred Deer, stars as Selah, a teenager who knows no life other than that of the religious, patriarchal cult run by the Shepherd (Game of Thrones alumnus Michiel Huisman).

There are numerous pointers towards a quasi-Christian mythology. The Shepherd’s adopted title reminds us of the 23rd Psalm. The shoulder-length hair and medium-length beard suggest western interpretations of Jesus Christ. As the film progresses, however, it becomes clear that the only theology acknowledged is that which bolsters the leader’s authority. Nobody else is allowed to tell stories. His control over the all-female tribe is total.

The picture was largely filmed in Wicklow, but, the odd tell-tale waterfall aside, little points towards that famously verdant county. Shooting largely in the colder months, Michal Englert, Szumowska’s regular cinematographer, gives us a bleakly attractive rural Nowhere that could as easily be Tasmania as the Garden of Ireland.

It comes as a surprise — though not exactly a twist — when the fictional location is eventually revealed. Stomping around in all that mud and ooze, the woman should really be filthier than the Manson Family, but Szumowska is not striving for any sort of realism. Dressing the mothers in red and their daughters in blue, she creates a superficially ordered society every bit as neatly oppressive as that in The Handmaid’s Tale.

The reference to lambs in the title is both literal and metaphorical. The women do, indeed, tend to flocks, but Selah, moving towards womanhood, is also threatened with becoming the latest lamb to the Shepherd’s sexual slaughter. The film is, thankfully, not explicit, but the intricacies of family relations are horribly clear from the opening frames.

There is, to be honest, not a great deal that is new in the cult’s philosophies. The Shepherd follows the playbook for a hundred real-life criminal misogynists. The philosophies play to attitudes common in wider society for millennia. The Polish director, who won Jury Grand Prize at the Berlin Film Festival for the excellent Mug, is more dedicated to creating a fully fleshed out — if slightly fantastic — world than tweaking the genre’s established conventions. CS McMullen’s script is raw and skeletal. The camera never gets overexcited.

A series of apocalyptic visions pile on suffocating tension as Selah works her way towards an inevitable crisis. Cassidy deserves much praise, but this is an ensemble piece and the circling cast complement her beautifully. Kelly Campbell and Denise Gough, both experienced performers, stand out among the domestic performers. Huisman wisely dials down the malevolence to create a demon of dull charisma. In different circumstances, this Shepherd could be the least interesting crackpot in the saloon bar.

If the picture does meander a little in its middle sections, it encounters complete redemption with a satisfactorily unambiguous denouement. Definitely worth seeking out.

Streaming on Mubi from October 16th

Cat Power: ‘I was never an alcoholic. I was suffering from extreme depression’
2

Covid-19 and dementia: ‘My father studies me, as if trying to put together a difficult jigsaw’
5

The Movie Quiz: Maureen O’Hara was raised in which leafy Dublin suburb?
9