Body of Water: Powerful study of an eating disorder 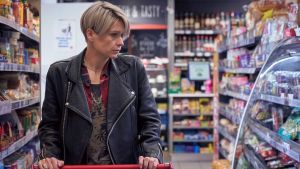 Body of Water: Far from an easy watch but leaves an impression

Nobody could accuse Lucy Brydon of coming at her subject from too oblique an angle. The debut writer and director has studied the dynamics of anorexia and put much of her research on the screen. At times one does yearn for a little more air, a little more distance, but the power of the tale cannot be denied. Insufficient filmmakers have travelled down this road.

Defying one stereotype of the condition, Brydon focuses on a middle-aged woman battered between a recalcitrant teenage daughter (Fabienne Piolini-Castle) and an often unsympathetic mother (Derry-born veteran Amanda Burton).

The picture begins with Stephanie (Siân Brooke) emerging from a treatment facility and making tentative steps to rebuild bridges with the generations above and below. Early on, in a group session, the mentor, comforting another attendee, says: “They’re talking to the illness, not you.”

We should all understand this distinction by now, but Body of Water makes it clear that, even within a comparatively functional family, relatives still see only the condition. As Stephanie forces herself to chew through unappetising meals and ignore insensitive remarks — “It would work better on a girl with curves,” a relative says of a frock she tries out for a wedding — she ponders the comforts of her dangerous disease.

“There is no other high like the feeling when you are empty,” someone else at the groups says. “Empty” is such a powerful word. That sense of striving to rid oneself of inner complications is palpable throughout.

Drinking water repeatedly — the title refers to the human frame and the nearby sea — Brooke makes the most of a character who gets few opportunities to express her torment. Evasion, obfuscation and misunderstanding are more usual avenues for emotional release. If this forbidding film has a message it is that humans too often underestimate the damage that comes from avoiding the issue right under our noses.

Closing in a fashion that will surely divide professionals in the field, Body of Water is far from an easy watch. It is stark and unyielding throughout. But it will leave an impression on anyone adventurous enough to dive in.