Review: A loving homage to the lush Technicolor ‘woman’s pictures’ of yesteryear 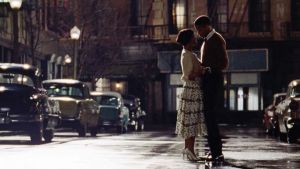 Ashe negotiates a groundbreaking path for his determined, ambitious characters

There’s something of Todd Haynes’ Far From Heaven and Carol in Eugene Ashe’s sumptuous period romance. A loving homage to the lush Technicolor “woman’s pictures” of Douglas Sirk, Sylvie’s Love is the kind of film that might, under that German director, have featured Rock Hudson and Jane Wyman in the leading roles and Dorothy Malone as the temptress who tries to come between them. But where Todd Haynes leans on the 1950s as tragic and less enlightened times, Ashe negotiates a groundbreaking path for his determined, ambitious characters.

It’s 1957 in New York and Sylvie (Tessa Thompson) is holed up in her dad’s record store, watching television and dreaming of a career in TV production. Her fiance is abroad serving in the Korean war but that doesn’t stop sparks from flying the moment that aspiring saxophonist Bobby (Nnamdi Asomugha) walks up to the counter and asks for the newest record by Thelonious Monk. It helps that Sylvie is soon convinced that Bobby is the most gifted tenor sax player since John Coltrane. Their ensuing flirtation and eventual romance plays over six years, as various circumstances work to confer a starcrossed status upon the couple.

Sirk was socially conscious enough to make the compromised racial drama, Imitation of Life about a woman of colour who can pass for white. But I cannot think of another film in which a couple of colour blaze up the screen like Thompson and Asomugha do. Or indeed a film, which in keeping with the spirit of the Golden Age of Hollywood, makes such dreamy use of hairstyles.

See it and swoon.