Two Ways Home: A drama about bipolar disorder that might do some good 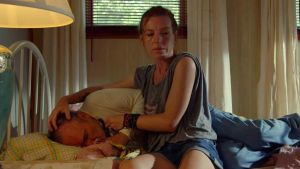 I’ll give Ron Vignone one thing (and a few others). You would, from its opening shot, not take Two Ways Home for a campaigning film. We are unashamedly in Pulp Fiction territory. A confused woman named Kathy (Tanna Frederick) is holding up a convenience store with her equally incompetent sidekick. But her heart isn’t really in it. “Can we not give the young folks back their money?” she wonders.

She is banged up in the local clink, but the authorities have been keeping an eye on her. Somebody calls round to suggest that she has a chemical imbalance in the brain and to recommend medication before an imminent release.

Kathy is soon back at home in rural Iowa. Her 12-year-old daughter, now snootier than a society dowager, is unforgiving of the woman who wasn’t there. Grandad (reliable character actor Tom Bower) is laid up in hospital after a heart attack. All the ingredients of dime-store soap are ready to be boiled up.

Frederick is terrific as a woman who knows she has done wrong, but isn’t prepared to wear sackcloth and ashes. The citizens are more forgiving than she at first suspects. After Kathy stammering out that she has a criminal record when interviewing for a waitress job, the proprietor calmly notes that her approach is “so gosh-darned refreshing”. She is tired of being lied to.

There are no great show-stoppers and few astonishing chicanes along the way – grandad and daughter help each other towards different classes of rehabilitation – but you would never suspect you were watching a film made in co-operation with the National Alliance on Mental Illness. Though truths about the bipolar condition are woven into the story, nobody stops to read out any manifestos or summarise any pages from the medical manuals.

A decent, low-key drama that might do a little good in the world.

Video on demand from January 4th