We Can be Heroes: A defiantly unthreatening movie from the oldest kid on the block

Review: Just try and stay out of the room for the excruciatingly sunny David Bowie cover 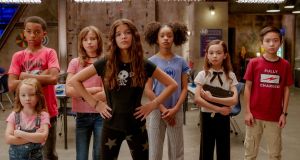 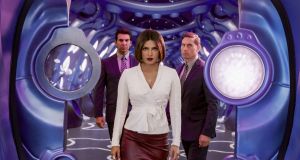 We Can Be Heroes: Priyanka Chopra as Ms Granada. Photograph: Ryan Green/Netflix

Film Title: We Can be Heroes

Robert Rodriguez, still the biggest kid on the block at 52, has never hidden his affection for trash culture of earlier generations, but his own rubbish has a quality that is very much his own.

If you sat through the splendid Spy Kids at the start of the century or the less lovely Sharkboy and Lavagirl a few years later, you will, after just a few eye-gouging seconds of his current new year gift to Netflix, immediately be aware you are on a trip back to Rodriguez City. The blaring, mid-budget CGI environments. The broadly-written, yelled dialogue. The cheery, irrepressible kids.

One might cynically venture that few film-makers would bother copying his aesthetic, but even if they tried, they would surely get nowhere close to the real thing. For good or ill, this world is all his own.

We Can Be Heroes is, in fact, a sort of sequel to Sharkboy and Lavagirl. How times have moved on. Those two super-kids are now adults. Taylor Lautner, who went on to become the one you liked less than Robert Pattinson in Twilight, is unavailable to play Sharkboy. Taylor Dooley, sadly still without her own entry on Wikipedia, is back as Lavagirl. Never mind that. The candied garbage version of Anthony Trollope’s The Duke’s Children, We Can Be Heroes is here to sell us the next generation.

Built around the response to an invasion by many-armed space things and an apparent conspiracy at the top of the US government, the film is, for all its flash, a pleasingly old-fashioned affair. Like The Famous Five or the boating heroes of Swallows and Amazons, the young mutants – one is stretchy, another can control matter with her voice, a third rewinds time – are left on their own to solve mysteries that baffle adults and to hunt down villains who evade the senior authorities. The violence is bloodless. The humour goes nowhere scatological. The morals are as sound as any in Paul’s Letters to the Corinthians.

Indeed, one wonders how many kids capable of walking unaided will have the patience for something so defiantly unthreatening. Still, we need a baby-sitter we can trust while nursing the last of the season’s hangovers. Just try and stay out of the room for the excruciatingly sunny cover of David Bowie’s Heroes.