Review: A gentle, thoughtful picture with big ideas about personality, life and death 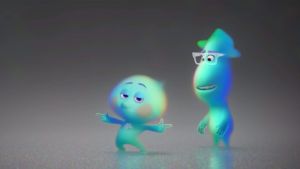 A metaphysical dramedy set against an often trippy, post-Sergeant Pepper vision of life before life and life after death

Remember the opening sequence of Up, in which the protagonist’s romantic life was condensed into a montage that ended with the death of his wife? By now, we’re accustomed to Pixar premises and opening gambits that make you think: “Isn’t this supposed to be a cartoon?”

Even by the standards of the animation studio that brought us Ratatouille and Wall-E, Soul sounds like a tough sell. A metaphysical dramedy set against an often trippy, post-Sergeant Pepper vision of life before life and life after death, Soul is an imaginatively rendered mid-life crisis.

The film’s hero, Joe (voiced by Jamie Foxx) is a high-school music teacher who, despite the prospect of a pensioned promotion, still dreams of being a professional jazz pianist. When he finally lands an opportunity to play with legendary saxophonist Dorothea Williams (Angela Bassett), he falls down a manhole on the way home. Hovering between life and death on Earth, his soul in the afterlife teams up with 22 (Tina Fey), a cynic who has defeated every mentor from Mother Teresa to Muhammad Ali in her efforts to remain unborn.

A comic body swap and some mildly scary shenanigans ensue, but mostly Soul is a gentle, thoughtful picture with big ideas about the human personality, life’s true purpose, and death. At a conceptual level, zig-zagging between those grand philosophical considerations and various cartoon dimensions with complex rules can feel a little cluttered.

But the visuals are as wildly original as the script, which was co-written by Docter, Kemp Powers, and Mike Jones. Plenty of gags are mined from the Great Before’s team of counsellors (including Richard Ayoade and Alice Braga), all of whom are named Jerry. Graham Norton pops up as an otherworldly sign-spinner. The music, written by Trent Reznor and Atticus Ross is beautifully animated in abstractions that recall Chuck Jones’ groundbreaking The Dot and The Line.

Move over Hamilton. This is the Disney+ event of 2020. A delightful Christmas present.