After We Collided: Half-digested movie tropes regurgitated by Google Rom-dram

Review: The dialogue often sounds like they are attempting a new cussword record 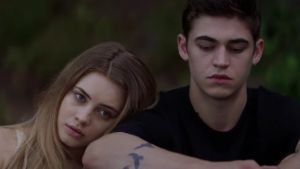 After We Collided, adapted from the second instalment in Todd’s literary sequence, opens rather grandly with a montage condensing the previous film

Film Title: After We Collided

Pop quiz. Do you know who “Larry Stylinson” is?

No? Well, buckle up.

After We Collided is the sequel to After, a movie adaptation of Anna Todd’s bestselling YA book, a novel that began life as One Direction fan fiction on the storytelling social platform, Wattpad.

After We Collided, adapted from the second instalment in Todd’s literary sequence, opens rather grandly with a montage condensing the previous film. Just so the new viewer can keep up with the sophisticated plot. “This is our story: Tessa’s and mine,” says Hardin Scott (Hero Fiennes Tiffin).

“It’s a story you’ve heard before. Passed down from the Greeks, through Shakespeare, the Brontes, Jane Austen. It’s the story of a young girl exploring her independence, free from the bonds of her oppressive parents. And promised to a boy she clearly does not love.

“She meets a dashingly handsome young man who sweeps her off her feet even though she represents everything she detests. She falls for him. Gives herself to him. And is ultimately betrayed by him. And left shattered. Only it is he who is destroyed by his deceit.”

Shakespeare, as in the playwright? Jane Austen, the novelist?

Not even in tiny, magical homeopathic dilutions.

This plotsplaining is remarkable as the only section of the movie that does not contain swear words. The dialogue, penned by Todd and Mario Celaya, often sounds like they are attempting a new cussword record: “I f**king love you” cries Hardin. And move over His Girl Friday: here comes what passes for witty repartee: “Haven’t you got some carpet to munch on?”

The plot, as billed in the opening voiceover, never materialises. Things just happen. Like beer pong and a hair-pulling girl-fight. Hardin’s mother appears so Tessa has to pretend to be his coerced girlfriend again. Other men keep falling in love with Tessa and giving her things. Tessa gets drunk on “swanky” cocktails (Sex on the Beach). She requires rescuing but someone has taken his trousers off. (Yes, this is a real scene). She gets a new job at a publishing company and is immediately promoted to “buys new dress”.

It’s difficult to convey the discombobulating, near-Brechtian sensation of After We Collided’s unique blend of the familiar and the totally haphazard. Have you ever watched those videos in which an AI, taught to scour the internet for images of cats, generates digitised felines with meme-friendly impact font included as part of the animal?

That’s After We Collided. A series of half-digested movie tropes regurgitated by Google Rom-dram. The same software presumably demanded that 37 percent of the film be composed of moan-over canoodling between the entirely chemistry-free leads, Fiennes and Langford.