Robert Rodriguez: ‘I like making movies that empower children’ 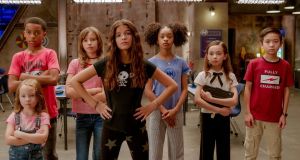 If you have even a passing interest in film, you likely know the Cinderella story behind Robert Rodriguez’s 30-something-year career. One of 10 children born in Texas to Mexican immigrants, Rodriguez loaned his body to medical science to help fund his debut feature, El Mariachi.

He had hoped that this $7,000-budgeted project might sell to the Mexican video market. Instead it won the audience award at Sundance in 1993 and was snapped up by Columbia Pictures. Rodriguez recounted his one-man-crew experiences in his 1995 memoir, Rebel Without a Crew: How a 23-Year-Old Filmmaker with $7,000 Became a Hollywood Player.

Some 18 feature films later and the erstwhile writer, director, editor, compose and SFX supervisor continues as a fiercely independent presence on the cinematic landscape. His “Mariachi style”, he says, accounts for his prolific movie output, his many collaborations, his founding of the El Rey TV network in 2013, and many more artistic endeavours besides.

“I don’t work,” he smiles. “I’ve never worked a day in my life because I’ve done my movies my own way, where I do a lot of the jobs. It seems like a lot of work but it’s actually a lot of play. I switched the word “work” for “play” a long time ago. When I do a lot of jobs, it keeps the budget lower and that gives me the freedom to create whatever I want. So I play all the time. I keep my energy level up because I’m not really working for somebody. I don’t work for a studio. I work for myself.

My kids are such a big part of my life. I have five of them and then I’m from a family of 10. So I still remember what that was like

“When you’re making your own things constantly, you get excited about it because you have real ownership. Having a studio tell you that you can’t do this or that – that would be work. And I stay creative in everything I do. Doesn’t matter if it’s making a meal or playing with my kids or taking on a business call. That’s my secret. I don’t compartmentalise. I’m already in a creative flow because I’m being creative day in, day out.”

Back in 2001, many critics and commentators were perplexed by the news that Robert Rodriguez, the writer- director of such bloodsoaked classics as El Mariachi, Desperado and From Dusk till Dawn, had made a children’s movie. Four movies and one television series later, and Rodriguez’s Spy Kids franchise has grossed over a billion dollars and featured everyone from Cheech Marin to Sylvester Stallone.

“I put jetpacks on kids,” he told this newspaper in 2019. “That’s just the way my imagination has always worked.”

He sure does. Released in 2005, The Adventures of Sharkboy and Lavagirl in 3-D, a second kid-friendly project, concerned two pre-teen superheroes, and was conceived, in part, by Rodriguez’s children. We Can Be Heroes, the writer-director’s latest foray into family filmmaking, is not a sequel to that picture, but it is set in the same universe. (The director has, additionally, co-written the 2019 psycho-horror Red 11 with Racer Rodriguez, the son who helped fashion Sharkboy.

“I loved returning to that world,” he says. “It’s so inspiring to go back. My kids are such a big part of my life. I have five of them and then I’m from a family of 10. So I still remember what that was like. When you make family films, you get to use the totality of your imagination. And when children are working on it with you, you get to see their creativity blossom. It makes for a wonderful environment on set. You play. A lot of the kids on the new film had martial arts skills. One had parkour skills. So I put those in the movie. As soon as we shot some little cool sequence I would go edit it that night and show them the next day. And they would go, whoa.”

When the Spy Kids TV spin-off proved a smash hit for Netflix, the streaming platform asked Rodriguez for a standalone film. We Could Be Heroes is almost that. It does, albeit briefly, mark the return of an adult Lavagirl and Sharkboy, the characters originally played by Taylor Dooley and Taylor Lautner. Dooley reprises her role but Twilight star Lautner, who gave up acting in favour of college in 2016, does not.

Rodriguez did reach out, he says. “I told Taylor the part wasn’t enough for him to do it, being a mask the whole time. But maybe if there is a sequel, who knows? I would love to do a spin-off movie with Sharkboy and Lavagirl again someday. I love those characters. But this isn’t their movie. In fact, the movie didn’t have them at all in it when I started. I was writing an original film for Netflix. But sometimes, you know, you borrow Spider-Man and put him in an Avengers movie. So I thought: maybe we could do that if the movie was a go. I got Taylor Dooley back because it was mainly going to be focused on her and her daughter. I wanted to create this little hybrid super-kid, Guppy, who had both shark powers and lava powers.”

They make every kind of superhero movie there is. And TV shows and side characters and reboots. But nobody has made anything for kids since Sharkboy and Lavagirl

We Can Be Heroes takes place when alien invaders kidnap all of Earth’s superheroes, leaving their kids in a safe house under the thumb of government operative Ms Granada (Priyanka Chopra Jonas). The safe house, however, turns out to be not so safe after all. And the kids, led by Missy Moreno (YaYa Gosselin), set out to save their super parents.

For Rodriguez, who started out as a pre-teen video-maker by casting his own siblings in goofy kids’ movies, it’s a new film for his most “rabid fanbase”.   “A lot of times kids are an afterthought for movies,” he says. “A lot of movies are PG-13 and the people who make them think that the kids are going to come anyway. They think we don’t have to make anything for kids – if the parents are going to come, they’re going to bring the kids. It doesn’t matter that the films are not really appropriate for them. Who cares? I do. I like making movies that empower children. And they watch movies like Spy Kids over and over – much more than they watch the Avengers movies – because they speak to them. I wanted to make something about kids learning how to work together, preparing to take over from their parents, and not screwing up the world like their parents.

“When I test films like Spy Kids, like the new film, they’re like: where has this movie been all my life? You know, they make every kind of superhero movie there is. And TV shows and side characters and reboots. But nobody has made anything for kids since Sharkboy and Lavagirl. And that was 15 years ago.”

When we last caught up with Robert Rodriguez, he was completing duties on Alita: Battle Angel, a $200 million digital adaptation of Yukito Kishiro’s 1990s manga series, as produced by James Cameron (Titanic, Avatar) from a hefty 186-page screenplay. We Can Be Heroes feels more like the work of a director who has generally resisted the lure of the big-budget movie in order to maintain complete artistic independence.

“It was great to get the experience of Alita: Battle Angel,” says Rodriguez. “I learned a lot of things that I was able to bring that apply to this movie. Because Weta [the SFX house] enjoyed working with me on Alita, they said we want to make your next movie. I said: well, I don’t have that kind of a budget, but they said they would make it work. And they did. And I learned so much working with Jim [Cameron] and his team. It’s worth doing a bigger production like that – one that wasn’t like my home-made movies – so that when I went back to my home-made movies I was better. It’s like being a chef and going to work in a big kitchen with the pros.”

Rodriguez enjoyed a similar learning curve when he was drafted in by Jon Favreau to direct an episode of The Mandalorian – Chapter 14: The Tragedy – for Disney Plus.    “They have these things called Rockcamp and you go to camp and you get to play on stage with maybe Joe Perry or something,” says the filmmaker. “That’s what Mandalorian was. It was my Star Wars camp. It was super fun. I got to play with all the Star Wars toys.”

We Can Be Heroes is on Netflix from December 25th