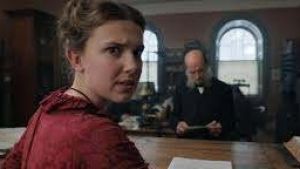 Just when you think you’re all Sherlocked out, along comes Enola Holmes to steal some of her older brother’s thunder. Based on the book series of the same name by Nancy Springer, this all-ages crowd pleaser casts a thrillingly charismatic Millie Bobby Brown (Stranger Things) as the young proto-feminist sibling of Arthur Conan Doyle’s most famous creation.

A capable young woman with a head for books, cryptology, archery, and most other things, Enola’s world is upended when her equally independent militant suffragette mother (Helena Bonham Carter) disappears. Her brothers Sherlock (Henry Cavill) and Mycroft (Sam Claflin) descend upon the family home, the latter having decided to entrust his sister in the stern, lady-making clutches of schoolmarm Miss Harrison (Fiona Shaw).

Enola has other ideas. She takes off in search of her missing parent only to encounter a similarly aged fellow runaway Lord Viscount Tewksbury (Louis Patridge). He’s very dashing but never mind all that: his vote may just swing the Reform Act in the House of Lords.

Warm, witty and heaps of good fun, Enola’s to-camera addresses and illustrated thought processes – because girls can have mind palaces too – are only bettered by her verbal swipes at her brothers: “Politics doesn’t interest you,” she says. “Because you have no interest in changing a world that suits you so well.”   Working from a lively script by Jack Thorne, director Harry Bradbeer (best known for his work on the television shows Fleabag and Killing Eve) keeps up a rollicking pace.

The historical CG backdrops are stylised just enough to look and feel like a storybook. The supporting cast are excellent. Claflin and Shaw have fun channelling Victorian era meanness. Cavill adds a pleasing performance and chuckle – you’ll know the one – to the Holmes canon. More please.

Enola Holmes is on Netflix