The Devil All the Time and White Riot on demand, Rocks and Nocturnal on release 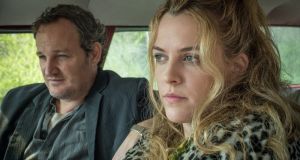 Jason Clarke and Riley Keough in The Devil All the Time

THE DEVIL ALL THE TIME ★★★☆☆
Directed by Antonio Campos. Starring Tom Holland, Bill Skarsgård, Riley Keough, Jason Clarke, Sebastian Stan, Mia Wasikowska, Robert Pattinson. Netflix, 138 min
Adaptation of an acclaimed novel by Donald Ray Pollock plays like a parody of all southern Gothic tropes. Pattinson is a preacher with a passion for tender flesh. Keough is a twisted young woman who, in the company of her even more deranged husband (Clarke), lures young men into her car and shoots them dead. Set beside all these, Holland’s religious maniac seems positively sane. Don’t come for sociology. Come for top actors enjoying a weekend off the leash. It’s mad, but compelling. DC

Smashing doc on Rock Against Racism. From 1976-1982, that organisation brought together all kinds of musicians – punk, post-punk, reggae, ska – to protest a rising swell of racism in Britain. There seemed, in those dangerous times, a real chance that the National Front could become a legitimate force in politics. RAR helped stem the tide while relaying some excellent music. Nicely edited. Excellent archival footage. Cool graphics. What more could you want? Bondage, up yours? DC

Rocks (played by the brilliant Bakray) is a British-Nigerian 15-year-old returning to school with her loud and lively friends Sumaya, Agnes,, Yawa, Khadijah and Sabina. The ethnically diverse group are as tight as they are apt to stage a food fight in home economics. Director Gavron workshopped for more than a year and cast from comprehensive schools in East London to create this electrifying teen drama. Those preparations tell in a film that feels as authentic as it is boisterous. TB

Dublin-born Coe is impressive as a friendless 16-year-old who has returned from Ireland to the Yorkshire seaside town where her mother (Frost, reminding us all how good she is) grew up. She’s running on the track when she attracts the attention of a 33-year-old odd-job man (Jarvis). At 85 minutes, Biancheri’s debut feature feels a little slight. But Nocturnal remains an impressive piece of work, anchored by a two-step between the smart-mouthed teen and her painfully awkward adult chum. TB