At 51, Craig needs to work hard to convince as the UK’s greatest killing machine 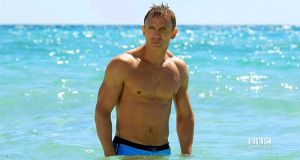 Daniel Craig: One of his films made $1.1 billion

Sources tell me there is more pointless James Bond speculation in the Daily Mail. I’m betting that somebody off the telly is being lined up for the job that Daniel Craig hasn’t yet relinquished. Is it Phoebe Waller-Bridge? That sounds like something they’d say. I can think of few better ways of trolling the 26 blokes who turned up to hear Nigel Farage in a car park last week.

No, it’s Sam Heughan out of Outlander (beats me too). But that’s just an aside in the quiet centre of the piece. The lede deals with rumours that Craig is training heavily to get back into shape for the film they’re calling Bond 25.

“Sources on set” have expressed surprise at the extent of his physical jerks. “Being Bond requires a lot of energy and he is determined to make sure he is ready for it,” the 007 Deep Throat murmured. “It’s an action movie and he wants to give it his absolute best.”

The Mail reports that: “He has been enduring a gruelling diet and fitness regime that culminated in staggering 12-hour workout sessions last week”

Yeah, I know. Move along. Nothing to see here. Now 51, Craig will need to lift the odd medicine ball if he wants to convince as the UK’s greatest killing machine. He and his wife are certainly medical marvels. Rachel Weisz recently gave birth at the age of 48. But you can’t expect all the punters to know that. Lift that barbell, Dan.

The (cough, splutter) “story” does, however, remind us of how Bond’s image has changed over the years.

There is a precedent for 007 going to the health farm. Published in 1961, Ian Fleming’s Thunderball – totally awesome, by the way – begins with the secret agent in a state of near-physical collapse after days of caning it like a rugby supporter.

“He was ashamed of himself – a rare state of mind,” we read on the first page. “He had a hangover, a bad one, with an aching head and stiff joints. When he coughed – smoking too much goes with drinking too much and doubles the hangover – a cloud of small luminous black spots swam across his vision like amoebae in pond water.”

There’s a lot more where that came from. He goes on to explain how he lost a fortune playing bridge. At a later meeting with M, he is told that he looks like a bleeding wreck and that he needs to spend time at a health facility. The medical officer’s assessment is damning.

“Despite many previous warnings, he admits to smoking sixty cigarettes a day,” M reads. “These are of a Balkan mixture with a higher nicotine content than the cheaper varieties. When not engaged upon strenuous duty, the officer’s average daily consumption of alcohol is in the region of half a bottle of spirits.”

It’s worth remembering that, in the novels, Bond is stranded in his mid- to late-30s. If he’d gone on at that rate, he’d have looked like late-period Oliver Reed by the time he attained Daniel Craig’s age. The man would have trouble walking up a flight of stairs, never mind hanging repeatedly from helicopter landing skids.

Anyway, in Thunderball, Bond’s trip to the health farm is interrupted by meetings with a glamorous hoodlum that lead to all the expected violent tussles. This isn’t Middlemarch.

Fleming did not, of course, need to produce an actual human who met the implausible description of his fictional hero. In the 1966 film of Thunderball, Sean Connery, then perfectly poised at 36 years old, was already beginning to recede at the temples and swell at the waist. You wouldn’t count on him beating the current version of Daniel Craig in an arm-wrestle.

The physical decline became considerably more pronounced in the Thatcher era. Born three years before Connery, Roger Moore took over in 1972 and continued until 1985. He would have been 57 when he shot A View to a Kill and had already relaxed into a style of action cinema that saw stunt doubles being summoned for anything more taxing than a light jog,

Those days are long gone. Tom Cruise is about the same age as Moore was at the end of his Bond career, but nobody is marking him down for the studded leather wingchair in the gentleman’s club. He did as many as his own stunts as possible in Mission: Impossible – Fallout.

It’s still possible to play Bond in deep middle-age, but, unlike the version in the books, you can’t look as if you live off cigs and vodka. The only six-pack allowed is (sorry about this) the one between your nipples and your belt-line.

Hollywood was always about fantasy. The movies are, now, even more insistent in their argument that stout Britons can live forever and kill for their country at an age when their dads were tending the allotment.

For all that, I think we can forget about Idris Elba. Time still passes. The most-touted of all potential Bonds would be pushing 50 by the time any Bond 26 reached cinemas. The bloke off the telly probably has a better shot.

A plague on all our houses?
Real news has value SUBSCRIBE