Out of Blue: An odd film characterised by odd occurrences

Review: Patricia Clarkson’s great performance is not enough to make a good film 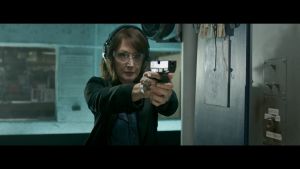 Patricia Clarkson as Mike Hoolihan, police detective. Clarkson is excellent but the tangle of details requires a big, fat melodramatic coincidence so that the film can find its way to a conclusion

Film Title: Out of Blue

The victim was found shot to death in an observatory, which is managed by a shifty Toby Jones. Other suspects include colleague and lover Duncan Reynolds (Jonathan Majors), her menacing wealthy father, Col Tom Rockwell (James Caan), and her mad-as-a-balloon mother (Jacki Weaver).

Who is the reporter that keeps popping up to ask Mike personal questions? Why does Mike suddenly start to strip at a club? What’s going on here?

Unhappily, the tangle of details requires a big, fat melodramatic coincidence so that the film can find its way to a conclusion.

There are moments when Carol Morley’s fourth feature offers a fair approximation of early David Lynch or mid-period Nic Roeg. (Rather appropriately, Nic’s son Luc is a producer here.) Yet, despite an incredible central performance from Clarkson and many interesting textures, Out of Blue is seldom as compelling as Morley’s atmospheric 2014 boarding school drama, The Falling, or, indeed, her powerful 2011 docudrama Dreams of a Life.

It doesn’t quite come together, but there are enough reliable, muscular performers to steal scenes and keep things interesting. Weaver manages to be the weirdest thing in a defiantly weird picture and James Caan channels John Huston’s evil Chinatown patriarch.

Why did reporter Christine Chubbuck shoot herself live on air?
4

The sad, secret life of Whitney Houston
7 Welcome to the child sex capital of Europe
8

‘Jennifer Aniston cried in my lap’: the inside story of Friends
10