The Highwaymen: Meet the guys who shot Bonnie and Clyde 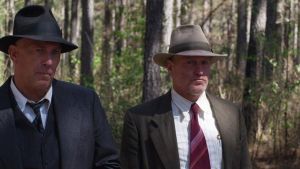 Ranger danger: Kevin Costner and Woody Harrelson in The Highwaymen

The most wilfully anachronistic film of 2019 is upon us. A riposte to Arthur Penn’s groundbreaking Bonnie and Clyde, this $49 million-budgeted G-man picture arrives more than 50 years after Warren Beatty and Faye Dunaway brought counter-cultural glamour to the outlaw business.

The Highwaymen, which concerns the Texas Rangers who shot Bonnie and Clyde down, is aware of and unbothered by its own antiquity. “Was a time we’d put a pair of man-killers on the trail and let them do their job: Texas Rangers,” prison governor Lee Simmons (the ever-reliable John Carroll Lynch) tells the Texas governor, “Ma” Ferguson (Kathy Bates, having fun with formidable).

Enter grizzled Texas Rangers Frank Hamer (Kevin Costner) and Maney Gault (Woody Harrelson), two old-school Ol’ Boys who, despite folksy banter, rusty target practice and prostate jokes, leave no one in any doubt as to their willingness to pull the trigger.

Time and again, The Rangers are thwarted by the public who, with few exceptions, idolise the outlaws. Adoring crowds swarm around Bonnie and Clyde’s car, preventing the police from getting a clear shot. A gas attendant tells Hamer: “All the luck to them: they’re only taking from the banks, who are taking from the poor folk like me.” Hamer responds with a thrashing.

John Fusco’s screenplay seeks to humanise the Rangers – Hamer has a pet pig, Gault tearfully confesses to wrongful shooting – while John Schwartzman’s beautifully lit cinematography seeks to dehumanise the outlaws. We seldom see Bonnie and Clyde on screen, and when we do, they are framed so we can’t see their faces.

It’s a little disconcerting watching a film that begs you to root for killer American cops in the era of Black Lives Matter. But this sturdy, macho, handsome picture, from the director of The Alamo, the writer of Young Guns and Hidalgo, and starring Kevin Costner at his most Gary Cooper-ish, makes few concessions to the age in which it emerged.

The wife part (Kim Dickens, marvellous and wasted) is just that. The politics are reactionary.

But any film in which Woody Harrelson gets to say “Clyde might be king, but I’m a Texas Ranger, you little shit!” is not without its rugged, retro charms.