The Man Who Wanted to Fly: a Cavan man in search of his dream

The official trailer for The Man Who Wanted to Fly, the story of Bobby Coote - a farmer from Co Cavan with a decades old dream of learning to fly. Video: Galway Film Fleadh 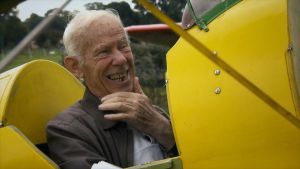 Film Title: The Man Who Wanted to Fly

For 50 years and more, Bobby Coote has dreamed of flying. Shot over five years, Frank Shouldice’s delightful documentary follows the County Cavan octogenarian on his eventful journey to the clouds.

But this is not just Bobby’s story. Ernie Coote, Bobby’s 80-something brother, lives next door of their farm outside Bailieborough. Bobby can fix any clock and makes violins from scratch; his instruments featured on an RTÉ programme many years ago.

Ernie thinks his brother is a genius yet believes that flying is best left to the birds. His earthbound preoccupations include gardening and CB radio; he keeps a photo album filled with postcards from other CB operators all around the world.

He and Bobby have both travelled and lived outside of Ireland but have returned to the place where they grew up. Neither has married although Ernie confesses he was once “half in love”. Both are content with their parallel lives. Bobby likes bringing his accordion out to the pub in the evening; Ernie prefers staying home with a Spaghetti Western.

But this is not just a story of the brothers; it’s a story of the community around them. Bobby is helped towards his goal by friends and neighbours, including Sean McBride, a farmer who sets aside land for a runway and helps Bobby build a hangar for the Microlight craft he buys with his savings.

Farther away, at Newtownards, engineers tinker with the Microlight aircraft to make it sky-worthy, while flying instructor Gerry Snodden prepares the pilot for his maiden voyage.

Working with cinematographer, Dave Perry, and a lovable cast of characters, director Frank Shouldice has fashioned a marvellous feel-good movie and a compelling portrait of life in rural Ireland.