Review: Jonas Åkerlund’s film offers a grisly depiction of the men behind a wave of church burnings 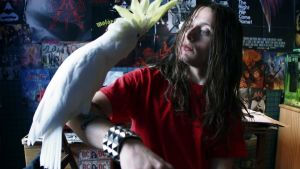 A scene from ‘Lords of Chaos’

During the 1980s, at a moment when American fantasists were busy inventing the “Satanic Panic”, an ocean away, Norway’s black metal musicians were committing acts of arson and murder. Lords of Chaos, a new film from music video veteran Jonas Åkerlund, gives an account of the pandemonium that defined the scene that is by turns grisly, grim, and darkly hilarious.

The film, as narrated by black metal pioneer and guitarist Oystein Aarseth (Rory Culkin), who went by the name “Euronymous”, charts the turbulent relationship between Euronymous and the intense neo-Nazi bass player Varg Vikernes (Emory Cohen). When Euronymous founds his band Mayhem – “the most infamous black metal band in the world”, by his own account – various line-up changes ensue in the struggle to be the most metal of them all.

It all looks like jolly posturing: “I was brought into this world to create chaos, suffering and death,” announces Euronymous without a hint of irony, before warning a band member not to throw up on his dad’s car. The addition of Swedish vocalist Per Yngve Ohlin (Jack Kilmer), known as “Dead”, ups the ante.

Dead’s flair for ghoulish theatrics, including cutting himself with knives and bottles onstage, culminates in a messy suicide. Not to be outdone, Varg insists that “we take this to the next level”. Thus begins a wave of church burnings that by 1996 had resulted in more than 50 such arson attacks. And then the killings begin.

Those familiar with contemporaneous news reports will know that Varg served a lengthy prison sentence before emerging as a neo-Nazi (and later Odinist) blogger. Cohen, who was so unassuming opposite Saoirse Ronan in Brooklyn, makes for a furious screen presence here. Culkin brings a softness to a character that does many reprehensible things. Despite disappearing early in the film, Kilmer is unforgettable as Dead.

Working from a screenplay co-written with Dennis Magnusson, Åkerlund accentuates the squabbling, misogynist club-house mentality of what became the “Black Circle”. The kids are not alright, but they are, nonetheless, just kids.