Bill & Ted Face The Music: third movie is totally on the way, dude

Stars Keanu Reeves and Alex Winter announce details of Bill & Ted Face the Music, which will hit screens next year 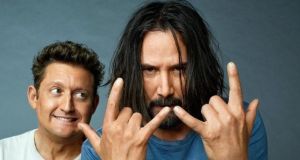 They’re the dopiest duo ever to have travelled to the past and the future, heaven and hell. And now, after an absence of nearly 30 years, Bill S. Preston, Esq., and Ted (Theodore) Logan are going back to the movies.

A third film in the Bill & Ted comedy series, to be called Bill & Ted Face the Music and starring Alex Winter and Keanu Reeves as the title characters, will go into production this summer and is planned for a summer 2020 release. Reeves and Winter announced details of the film on YouTube.

The original film in the series, Bill & Ted’s Excellent Adventure, was released in 1989, and chronicled the headbanging pair’s time-travelling adventures, as they crossed paths with Socrates, Billy the Kid and Joan of Arc while trying to pass their high school history class.

Excellent Adventure was an unexpected hit, boosting the film careers of Reeves ( who went on to star in the The Matrix and John Wick) and Winter (director of documentaries like Deep Web and The Panama Papers). The movie and the easygoing, hey-dude charm of its two leads also helped usher in a brief era of rock ‘n’ roll-obsessed comic twosomes.

A sequel, Bill & Ted’s Bogus Journey, in which they battled their evil robotic duplicates, visited the afterlife and encountered the Grim Reaper, was released in 1991. It received mixed reviews from critics who were wrong.

Bill & Ted Face the Music is written by Chris Matheson and Ed Solomon, who also wrote Excellent Adventure and Bogus Journey. It will be directed by Dean Parisot (Galaxy Quest, Red 2).

In a news release, press representatives for Bill & Ted Face the Music offered a brief synopsis of the film: “Yet to fulfil their rock ‘n’ roll destiny, the now middle-aged best friends set out on a new adventure, when a visitor from the future warns them that only their song can save life as we know it and bring harmony to the universe. Along the way, they will be helped by their families, old friends and a few music legends.”