Constance Wu on why representation matters, and how the summer hit is casting a new die for Hollywood romcoms 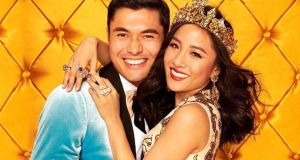 Constance Wu and Henry Golding in ‘Crazy Rich Asians’: ‘I definitely knew it was going to be very meaningful to a lot of people.’

Last spring, in just one of an ongoing series of controversies, Roseanne Barr took a shot at rival ABC sitcoms Fresh Off the Boat and Blackish. In an episode of the rebooted Roseanne, Barr and John Goodman’s characters fall asleep on the couch. When they wake up, Goodman’s Dan notes that they had “missed all the shows about black and Asian families,” to which Roseanne retorts: “They’re just like us. There, now you’re all caught up.”

Four months on and Roseanne the sitcom is cancelled, while Fresh Off the Boat’s Constance Wu is headlining Crazy Rich Asians, this summer’s soaraway sleeper hit.

“What she said wasn’t great,” says Wu. “She’s probably not going to be a person who is ever in my tribe. But as an actor our job is not to judge people but to understand them.”

The visibly thrilled Wu can afford to be magnanimous.

Back when Roseanne was making her mean-spirited joke, Crazy Rich Asians, which has squatted on top of the US box office for three successive weekends, looked like an outside bet. The leading man is Henry Golding, who is best known as a travel host for the BBC and is entirely new to cinema. An old-fashioned Cinderella story about an Asian-American economics professor travelling to Singapore to meet her boyfriend’s ludicrously lux relatives, the film is a wide-eyed, lovable romcom arriving at a time when Hollywood doesn’t do wide-eyed, lovable romcoms.

“Every good story has both levity and depth, and that’s what a good romcom does,” says Wu. “The rom is the depth, the com is the levity. If you have too much of one of those attributes it becomes indulgent, but when you have both, it feels great. It’s an awesome genre.”

It has been quite a fight to get Crazy Rich Asians into a multiplex near you. Kevin Kwan, who wrote the hit 2013 book on which the film is based, had to turn down numerous offers, including one producer who suggested changing the film’s heroine to a white American, in order to shepherd in a movie with an all- Asian cast.

Wu, who is currently gracing the cover of Time magazine under the heading “Crazy Rich Asians is going to change Hollywood”, has long had an inkling that the film was going to be a big deal.

“I definitely knew it was going to be very meaningful to a lot of people,” says Wu. “I kept hearing that even while we were making it. It did actually put a lot of pressure on me. It was scary. I’ve been an actor my whole life and all I would focus on is just the quality of the work. And suddenly this is so much bigger than an actor’s job. It’s something new that I’m just hoping to learn to navigate with grace and gratitude.”

This is quite the turnaround. As recently as 2016, Keith Chow, writing in the New York Times, lamented the whitewashed casting choices for Doctor Strange, Power Rangers, Ghost in the Shell and Aloha.

I work in the art of changing people’s minds, even if they are mean

Wu, too, has been consistently and fiercely outspoken about representation. Speaking at an industry panel in 2016, she decried the use of CG effects to “Asian-ise” Scarlett Johansson in Ghost in the Shell: “Some people call it ‘yellowface’, but I say ‘the practice of blackface employed on Asians’ because that’s more evocative.” Later that year she tweeted about the casting of Matt Damon in The Great Wall as a way of perpetuating the “racist myth that [only a] white man can save the world”.

She has been equally vocal in her support of Kelly Marie Tran, the Last Jedi star who deleted her Instagram account following a campaign of targeted harassment.

Wu’s own views have not always gone over well on social media.

“I work in the art of changing people’s minds, even if they are mean,” she says cheerfully. “It’s not that anyone should have to go through online abuse. But like to think it through. I’m not actually doing anything to this person but they’re trying to hurt me. Maybe they’re hurt. Maybe they don’t feel heard. So the first step is dealing with them is to say I hear you. You don’t have to agree with them. When people say ‘this movie does not represent me’, that’s fine: I hear you. Of course, I don’t think people should take out all their crap on me. Bullying sucks, but I think there are things to be learned from it. You’re never going to please everybody. And it doesn’t feel good. But I think if you make sure that who you choose to be around and what you choose to do stays in keeping with your values, you’ll be okay.”

Crazy Rich Asians, the first studio movie since 1993’s The Joy Luck Club to feature an all-Asian cast, has already grossed more than $150 million and has sent Hollywood scrambling to greenlight Asian-led projects, the same Hollywood that, for years, believed that an Asian-American cast couldn’t sell movie tickets. That AsAm quality, says Wu, should not be underestimated.

“There have been studio films like Crouching Tiger, Hidden Dragon that are period pieces and that take place in China, ” she says. “I think that’s an important distinction to make, because kids that are Asian growing up in western cultures are often told that our culture is represented by these Asian films. These films are wonderful. But to say they are representative says that our culture is only skin deep, that we’re perpetual foreigners, that growing up in America or England didn’t affect our identity, that it isn’t a part of who we are. Of course being part of a minority is going to shape your character – and not necessarily in a bad way – but it’s important to understand that just because somebody looks the same doesn’t mean that their story is the same.”

Wu’s own story begins in Virginia, where she was born to a genetics professor father and computer programmer mother in 1982. Both parents had emigrated from Taiwan. Aged 12, she landed her first starring role in a community theatre production of The Wind in the Willows. She stayed on the boards, earning a bachelor of fine arts in acting from State University of New York at Purchase in 2005 – although she briefly considered a career in speech pathology, having enrolled in the graduate programme at Columbia University.

“Ugh,” she says in her characteristically unguarded way. “I had a brief moment in time when I almost gave up acting to pursue a career in psycholinguistics. But that wasn’t because of acting. That was because I had this boyfriend who wanted me to be smart or whatever. It was like this whole thing. Because he was an academic. But that fizzled out real quick. I’ve been an actress my whole life. It has been my home. It has been my sense of purpose.”

Rather astonishingly, though she is 36 and has acted for more than two decades, Crazy Rich Asians marks Wu’s first role – of any kind – in a studio film.

“I was an extra on one movie when I was a teenager and that was it,” she says. “But I started in community and regional theatre where there’s a little bit less bias. I feel like it has been slowly changing every year. I think my TV show Fresh Off the Boat is indicative of that change. I think Moonlight winning the Oscar is indicative of change. It has been hard at times. Rejection sucks. But it’s like that great line in A League of Their Own: of course it’s hard; if it wasn’t hard then everybody would do it. It’s the hard that makes it great.”