Review: Lance Daly’s movie rattles along at the pace of a hungry dog pursuing a healthy rabbit 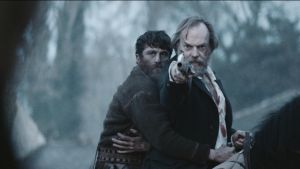 “It is the most significant moment in Irish history,” Stephen Rea said at the Berlin premiere of Lance Daly’s gloomy revenge drama. “We all live with it. We feel a sense of shame about it.”

Maybe it’s the Great Famine’s very significance that has kept it off cinema screens for so long. Every interested film-maker feels pressure to make the definitive gesture. It is more likely that directors have been scared away by the fear of disrespecting such unimaginable horror. There is no proper way of representing starvation in a dramatic movie.

Daly accepts that and has made no effort to slim his actors down to offensive faux-skeletons. The bodies pile up in the corners. The living, breathing performers invite an indulgence that audiences will surely allow.

The film-makers have done something a little riskier. The first widely released feature to focus on the Famine is an unmistakable genre piece. It’s a western. It’s a revenge thriller. More particularly, it’s The Outlaw Josey Wales with more rain and fewer Comanche.

The pompous Lord Kilmichael (Jim Broadbent) references that comparison with the American frontier by repeating a much-quoted line – famously found in Ulysses – whose source remains obscure. “Soon a Celt will be as rare in Ireland as a Red Indian on the shores of Manhattan,” he says with an offhand smirk.

Elsewhere, the picture works hard to include all the notorious injustices that sprang from that attitude. We actually see food being placed under armed guard. Emigration to America is a constant. We are so accustomed to jocular use of the phrase “taking the soup” that it comes as a shock to be reminded that broth really was offered as an inducement to conversion (however temporary).

None of this would be enough to sustain attention if the film did not have dramatic momentum, and the screenplay rattles along at the pace of a hungry dog in pursuit of a healthy rabbit.

Feeney (the persuasive, unexpectedly Australian James Frecheville) plays an Irish Ranger who returns from wars in Afghanistan to find his family caught in the cogs of the developing holocaust. Heaving around a head like an Easter Island statue decorated with weeds, Feeney soon encounters even worse outrages and, setting aside ideas of emigration, vows to pursue a war against the administrators and colonialist bandits.

The forces ranged against him are nicely varied. Stephen Rea is excellent in the part originally listed (I’m guessing) as “Stephen Rea Type”: the articulate, canny chancer who knows more than all the better-dressed snoots. Freddie Fox is sufficiently entitled as the young British officer who expects the oppressed to thank their oppressors.

The reliable Barry Keoghan brings crushed sadness to a young private who, at first, has no understanding of the enormities around him. At their head is the hollowed-out Hugo Weaving as Hannah, a former colleague of Feeney’s whose career as a policeman has been characterised by overzealous use of the fists.

You probably don’t need to be told that Hannah and Feeney are “two sides of the same coin”. Like Javert and Jean Valjean, they are locked into endless pursuit by the iniquities of the system. Both speak in subterranean monosyllables. Neither is much at home to levity.

The story does sometimes meander. A few of the action sequences give in to confusion. At times, the determination to include every historical detail causes the package to strain uncomfortably at the corners. But the grey pools of Declan Quinn’s cinematography and the evocative strains of Brian Byrne’s score – keening traditional flourishes balanced by angular melodies – keep the brain twitching in even the glummest moments.