Puzzle: A winning film to soften the heart of a rattlesnake 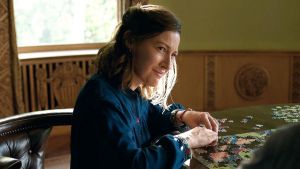 When I say that Puzzle is not at all what you’d expect from a film about the competitive jigsaw-puzzling community you will surely tick another clichéd critical gag off a too-long list. But it really isn’t.

An utterly winning project that could soften the heart of a rattlesnake, Marc Turtletaub’s drama – adapted from an admired Argentinean film by Natalia Smirnoff – sets Agnes (Kelly Macdonald), an apparently ordinary Connecticut mum, on the road to middle-aged underfulfilment.

She would be surprised to be told she’s unhappy. Her husband, a car mechanic, is not cruel or abusive. But he is habitually neglectful: we begin with Agnes madly catering for a birthday party that we only later learn is her own. The nicer of her two sons is grumpily working for his dad. The smugger of the two has half-baked plans to abandon college and bum pretentiously round Tibet.

Some sort of awakening happens when, in no time, she completes a 1,000-piece puzzle she received for that birthday. Venturing into New York to buy another, she encounters an eccentric millionaire (the wonderful Indian actor Irrfan Khan) and, yes, gets drawn into the world of competitive jigsaw solving. They sign up in for “the Nationals”, but she can’t bring herself to tell the family the truth.

Hang on. This actually is what you expected from a film about the competitive jigsaw-puzzling community. Puzzle sounds like one of those British movies – think Calendar Girls, The Full Monty and the recent Swimming with Men – in which ordinary folk gain enlightenment through an unlikely pursuit.

It’s not quite that. Oren Moverman and Polly Mann’s delicate script leaves the puzzling very much at the margins. There is only one very brief scene at a tournament. We get little on the strategies involved (a little less than I’d have liked, in fact). Instead the film is almost entirely focused on Agnes’s gradual awakening and her determination to belatedly exercise her underused intelligence.

Always strong in supporting roles, Macdonald achieves her own mid-career breakthrough with a fascinatingly complex lead performance that pitches natural inhibition against a growing inner confidence. Her eventual quiet triumph is among the year’s most hankie-dampening moments.