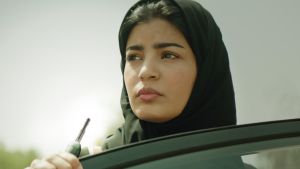 Mila Al Zahrani’s performance and the urgency of The Perfect Candidate’s issues elevate it from the ordinary.

After the decent Mary Shelley, Haifaa al-Mansour returns to her native Saudi Arabia for another study of the absurd pressures put upon women in that kingdom. Mansour’s earlier film, Wadjda, concerning a young girl who wants no more than a bicycle, was the first feature made by a woman in that conservative country.

Her new picture ups the stakes a little as she tells the tale of Maryam (Mila Al Zahrani), a doctor who, more through accident than design, ends up running for a seat on the municipal council. Her dad, a musician, is embarrassed. He sister is scarcely more happy. But they do not belittle or demean her. The rest of society is there for that.

Wadjda had the loose, rambling quality of an Iranian picture from the 1970s. Though entertaining throughout, The Perfect Candidate is slowed down by a need to detail all the difficulties a woman in such circumstances might encounter. We begin with a patient demanding to have a male doctor. Maryam has to address a public meeting via a video relay as she is not allowed to appear before such a group in person.

A dryly funny section has a TV interviewer suggesting that she must be particularly concerned with women’s issues such as gardens. (Mind you, Shirley Williams, the British Labour and Lib Dem politician, has explained that, not so long ago, female cabinet ministers were proverbially shunted towards “caring” briefs such as health and education.)

The script’s niftiest innovation is to focus on the need for a proper road up to the hospital. As events progress, that thoroughfare becomes a powerful symbol of Maryam’s sincere convictions. The men may think her silly and disrespectful, but they can’t laugh away a mum struggling through mud to attain the maternity ward.

Beefed up with one too many musical numbers from the protagonist’s dad, The Perfect Candidate feels a bit slight on plot and character. But Zahrani’s performance and the urgency of the issues elevate it from the ordinary. A great last shot compensates for all deficiencies.