Coronavirus: Has the drive-in movie finally found its moment?

‘We are delighted to offer an escape,’ say organisers of screenings in Dublin’s suburbs 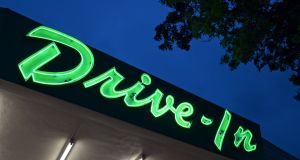 In the current crisis, everyone is looking for an entertainment that allows relief from cabin fever without exposing the family to any danger. Seven decades after reaching their peak in the United States, the drive-in movie finally finds it moment on this side of the Atlantic.

Retro Drive-In movies is among the companies offering punters the opportunity to watch films from the comfort of their vehicles. With conventional cinemas closed throughout the country, the operation will continue to screen movies at Leopardstown and Fairyhouse race courses.

“We are delighted to offer an escape for bored children and adults in the coming days,” Ryan O’Neill, managing director of Double R Media, explained. “Drive-in Movies are a unique experience where you can stay in your car for the duration. We have introduced other safety measures including ticket scanning through your window. We have limited the number of cars to less than 100, and we will be enforcing social distancing.”

The company, which shows its movies on “the world’s biggest LED screens,” is keen to stress that all advice on social distancing is being observed.

On Tuesday. March 24th, Retro Drive-In at Leopardstown will present an entire day of al fresco flicks including Peppa Pig, the original version of The Lion King, Mrs Brown’s Boys D’Movie and — a perfectly chosen film set in the drive-in era — Dirty Dancing. Also in the repertoire are The Greatest Showman, Joker, Paddington and The Goonies.

On Friday, March 27th, The Pop-Up Drive in Movie Theatre, a competing venture, will be screening The Dark Knight at the Balbriggan Car Boot Sale.

We sense the beginning of a craze.

It is early days in this strange, rolling misfortune, but it seems as if the enthusiasm for Drive-In is spreading across the nation that gave the medium breath. As vital to 1950s US popular culture as rock ’n’ roll or the hamburger — both of which could be enjoyed in the same surroundings — the drive-in slipped into precipitous decline during the 1970s. VHS offered a more convenient domestic alternative.

Few who were venturing outdoors wanted to see classy blockbusters such as Star Wars with poor sound and indifferent projection. At the height of the drive-in’s success in 1958, there were 4,063 screens across the US. By late last year, that total was down to a mere 305. Those venues survived largely as retro-novelties, but, according to a recent report in the LA Times, the demands for social distancing have triggered a surge.

Owners of drive-ins in California, Kansas, Oklahoma and Missouri told the paper that business has increased in recent days. The Paramount Drive-In in California has seen its ticket sales double.

There can be few other venues experiencing any similar increase in revenue (mind you, few other such venues are open). If this goes on we may see a return to the delightful cheap horrors and surfing romps made specifically for the car-bound viewer of the Eisenhower era. Whither the Robot Monster and Beach Blanket Bingo of 2020?

10 My life with the bin Ladens