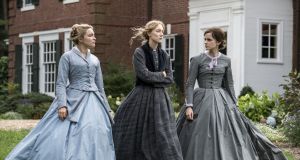 Louisa May Alcott’s classic 1868 novel Little Women is known for being forward thinking – but not so forward thinking that it predicted the invention of plastic water bottles or Hydro Flasks.

The gaffe was caught by Little Women superfan Madelyn Rancourt, who documented her finding in a TikTok video that quickly went viral.

I THOUGHT THIS WAS PHOTOSHOPPED SO I CHECKED AND ITS TRUE pic.twitter.com/AyybjUW7bw

PLEASE THE HYDROFLASK AND WATER BOTTLE I CANNOT pic.twitter.com/KxwFOSAfOL

The scene, early in the film, depicts four out of five members of the March family – Meg, Jo, Amy and their mother, Marmee – meeting their neighbour, Laurie, who later becomes an important part of their lives.

In the background of a shot, atop period furniture, sits a stainless steel drink bottle – identified as a Hydro Flask – and a plastic Poland Spring bottle.

Fans reacted with mirth and horror on Twitter, with some checking their own copies of the film to verify.

On Tuesday, Rancourt followed up with a second video, noting that Gerwig, and cast members Timothée Chalamet, Laura Dern and Saoirse Ronan, broke down the very same scene in commentary for industry magazine Vanity Fair – and did not make mention of the bottles.