Big-name auteurs in Croisette line-up, but only four films by women in competition 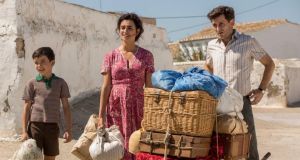 New work from Terrence Malick, Ken Loach, Pedro Almodóvar and the Dardenne brothers will compete for the Palme d’Or at the Cannes film festival next month.

The films were among those mentioned by Thierry Frémaux, the festival’s director, as he unveiled the official selection today in Paris. As rumours in the trade papers had predicted, Quentin Tarantino’s Once upon a Time in Hollywood, long mentioned as a potential highlight, is not yet finished, but Frémaux hinted that it might still be a late addition. “Quentin Tarantino’s film is not ready,” he said. “But we hope that we will have good news.”

Elton John will be in town to attend – and possibly sing before – the premiere of Dexter Fletcher’s Rocketman. Playing out of competition, the biopic will have special resonance for Cannes, as Russell Mulcahy shot the video for John’s song I’m Still Standing on the Croisette in 1983. “Elton John will be with us!” Frémaux confirmed.

The main competition is another strong combination of experienced professionals and intriguing young talents.

Loach, who has already competed more than any other film-maker, returns with a characteristically naturalistic film, entitled Sorry We Missed You. Were Loach to win the Palme d’Or, he would become the first person to triumph on three occasions.

Jean-Pierre and Luc Dardenne, who won for Rosetta and L’Enfant, will also be chasing that record with The Young Ahmed.

Malick, who won in 2011 with The Tree of Life, finally delivers A Hidden Life, his long-gestated historical drama. Featuring final performances from Bruno Ganz and Michael Nyqvist, both of whom died after the film was shot, in 2017, the picture is the true story of a conscientious objector in Germany during the second World War.

Those zombies will appear on the first evening when Jim Jarmusch’s The Dead Don’t Die opens the event. Adam Driver, Bill Murray, Selena Gomez, Tom Waits and Tilda Swinton are just some of the starry personalities chewing the flesh in the latest film from the American. It is a canny selection. The red carpet will be packed with celebrities. Jarmusch has been a friend of the event since winning the Camera d’Or, awarded to best debut film-maker, for Stranger than Paradise, back in 1984.

Frémaux finessed the announcement by declaring there would be 13 films by women in the official selection. But that covers close to 50 films in a wider programme that includes special screenings and the Un Certain Regard sidebar. Four of the 19 films in the main competition are from women. This is fewer than hoped but better than in many years this century. As recently as 2012, Cannes presented an all-male lineup.

The Senegalese director Mati Diop, whose Atlantique plays in the main strand, is among the few first-time film-makers to ever compete for the Palme. Céline Sciamma, director of the much acclaimed Girlhood, is in the competition with Portrait of a Lady on Fire. Jessica Hausner and Justine Triet will also be in the fight.

Especially when we are encouraged by Steven Spielberg, as well as theatre owners, we are not yet ready to welcome films that are not released in a theatre

For the second year running there will be no films from Netflix in the official selection. It never seemed likely that Martin Scorsese’s The Irishman would be ready, but a number of other Netflix titles were in the cross hairs. Frémaux referred to Steven Spielberg’s alleged reservations about the company competing for Oscars when addressing the continuing dispute. “The rule of the festival, for competition, is that films must be released in theatres… Especially when we are encouraged by Spielberg, as well as the theatre owners, we are not yet ready to welcome films that are not released in a theatre,” he said.

Relations with Amazon, one of Netflix’s streaming rivals, have always been warmer, and episodes from Nicolas Winding Refn’s TV series Too Old to Die Young, made for that service, will be screened out of competition (obviously).

Another hot ticket among the noncompeting titles will be Asif Kapadia’s Diego Maradona. Kapadia’s films on Ayrton Senna and Amy Winehouse were huge successes, and he surely deserved a spot on the main stage, but the programmers have, in recent years, proved reluctant to include documentaries in the Palme d’Or race. The great Argentinean footballer should add his own class of colour to the red carpet.

No Irish films have yet been announced for Cannes – the unveiling of the Directors Fortnight strand, on Tuesday, may bring good news – but Brendan Gleeson will be making an appearance in the main competition, opposite Isabelle Huppert, in Ira Sachs’s much-anticipated Frankie. “That was my first time with Brendan, and he was wonderful,” Huppert told The Irish Times.

Cannes Festival runs from May 14th until May 25th