Natalie Portman: ‘It’s dangerous when you can’t separate the emotion from the business’

The actor’s new films show the devastating effects of fame on young stars. She explains how she escaped a similar fate 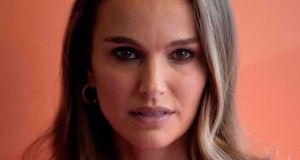 Natalie Portman: the actor has a good vantage point from which to discuss the hurt that can be caused by being in the public eye. Photograph: Geoff Robins/AFP/Getty

Natalie Portman has gone through something of a transformation in recent years. Seeking to do her bit to remedy the appalling lack of women directors in Hollywood, she took on 2015’s A Tale of Love and Darkness, an adaptation of Amos Oz’s novel about Israel’s difficult early years. “Having to watch my own footage in the editing room completely changed me as an actor,” she says. “I realised I was often doing the same thing every take, like I had picked the right way to do it and was just doing it over and over again. And I was, like, ‘Do something different!’ So I realised very late in the game how important it was to, like, really try different things.”

Following a fantastic performance in the 2016 film Jackie, she is again in front of the camera – but it is difficult not to think she may be trying to make a wider point about Hollywood: to have one film playing at the autumn film festivals that offers a critique of fame and the ghoulish things it does to people is noticeable enough, but to have two is downright pointed. To add another layer of intrigue, both are directed by child actors turned wunderkind film-makers.

Vox Lux, directed by the 30-year-old former teen actor Brady Corbet, is a brash, violent portrait of Celeste, a school-shooting survivor who becomes a child pop star. As the years go by she transforms into a vindictive, slowly imploding diva. Portman plays Celeste in her monstrous, spiralling final act, a performance that has been praised as her wildest since her Oscar-winning meltdown in Black Swan.

Then there is The Life and Death of John F Donovan. Directed by a former advert actor, Xavier Dolan, it follows the pen-pal relationship of a budding child actor, Rupert, and a closeted TV star, John F Donovan (Kit Harrington), and is inspired by Dolan’s own experiences of writing fan letters to Leonardo DiCaprio as an eight-year-old. Portman plays the boy’s mother, Sam, a failed actor who comes across as a distant figure, jealous of the possibilities her son still has ahead of him. Later we learn that her behaviour comes from a place of maternal caution. “She wants to keep him from getting hurt, like good parents do,” Portman says. “And he’s trying to urge her to let him get hurt, because it’s the resilience that makes you.”

A countdown was started on my local radio show to my 18th birthday, when I would be legal to sleep with. Movie reviewers talked about my budding breasts

Portman, of course, has a good vantage point from which to discuss the hurt that can be caused by being in the public eye. It is nearly two decades since she became the most famous teenager in the world with Star Wars: The Phantom Menace, and she has remained a famous fixture since. “In my real life I feel exposed to the public eye, and the concept of celebrity is part of my life,” she says, clutching a carton of coconut water. “But I do also lead a private, quiet life that is relatively guarded from the excesses we see in both the films. So I have access to both worlds.”

What saved her from a similar fate to John F Donovan or Celeste, she says, was the presence of people who “care about you, regardless of where you are in your career. My family and my friends are completely separate from my work side, so no matter where I was, it didn’t affect my relationships. You see with Celeste or John F Donovan that some of the people they hold dearest to them urge them to go on when they’re at their breaking point, because they’re profiting off their success. I think that’s really dangerous, when you can’t separate the emotion from the business.”

Portman’s early career was further complicated by her status as, in her words, “a fantasy object for men”, in films such as Leon: The Professional and Beautiful Girls. In a speech at the Women’s March in Los Angeles in January, she revealed the extent of what she went through. “I excitedly opened my first fan mail to read a rape fantasy that a man had written me,” she told the crowd. “A countdown was started on my local radio show to my 18th birthday, euphemistically the date that I would be legal to sleep with. Movie reviewers talked about my budding breasts in reviews.”

Understandably, given this, Portman has been a vocal supporter of the #MeToo and #TimesUp movements. “There have been incredible conversations about wage gap and representation in everything from who’s getting to direct films and television to who gets to review films,” she says. “So there’s so many incredible changes that have come on quite quickly. But there’s also a lot to be done, because it’s a systemic issue that’s embedded in our culture, and even in everyone’s psyches, men and women alike.” – Guardian