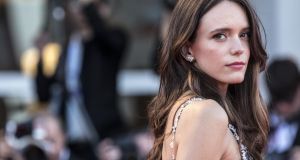 As Stacy Martin has it: her family don’t do things by halves. Aged seven, the Paris-born future star relocated with her French hairstylist father, René Martin, and her English mother, Annette, to Tokyo.

The family would live there until Martin was in her teens. It was less of a culture shock than one might suppose, she says, as she was young enough to pick up the language and she found herself at a French school where she was surrounded by kids going through the same experience. It did, however, set a kind of precedent.

“I’ve recently been reading about this term third culture kids,” she says. “It basically refers to people who have grown up living in different countries and different cultures and speaking different languages. It’s interesting that a lot of artists either have a military family, where they’re moving around, or they have parents who are artists who are moving around. I think changing routine is something that actors like.

They did ask me to think about it for a day or two. And I said, if I don’t ever do a film again, I will have got to make one with Lars von Trier, one of my favourite directors of all time

“My dad really wanted to work in Tokyo and he made it happen. That’s important in the way that I grew up. If my parents wanted to do something, then they would do it, and they always push me to try things, to not be afraid of changes and to go out in the world and not be bound by what we’re supposed to do.”

“For me it was a very easy decision,” she insists. “I barely had an agent at the time. They did ask me to think about it for a day or two. And I said: ‘Well, we can give it a day or two but my decision is still going to be the same, because ultimately, if I don’t ever do a film again, I will have got to make one with Lars von Trier, one of my favourite directors of all time.’ How many people have the chance to say that in their lifetime?”

“I definitely pay attention to the choices I make,” says the 29-year-old. “The type of films I enjoy making have directors who I enjoy watching. Ultimately it’s as important to say ‘no’ as it is to say ‘yes’. Saying ‘no’ is the thing that will ultimately lead you somewhere.”

Following on from her turn in The Childhood of a Leader, Vox Lux marks the actor’s second collaboration with the gobsmackingly impressive actor turned film-maker Brady Corbet. The film chronicles the lives of two very different sisters, Celeste and Eleanor (Martin), following the aftermath of a school shooting that leads Celeste to unexpected and eventual pop stardom with a song written by her sibling.

“After Childhood of a Leader, Brady was talking about this idea that he had,” recalls Martin.”I thought it was really fascinating but I wasn’t quite sure how he was actually going to make it work. So when I finally read the script I was amazed because it was like reading modern Dostoevsky. There were so many aspects and so many events and so many issues that are important in our society. And yet it wasn’t some long-winded documentary.”

Once Natalie came in with those very bold choices and moves, it gave me something to compare myself to. It was like playing a game with the other actor

Vox Lux is split into two parts (although both fit neatly into a 110-minute cut).

In the earliest scenes, Eleanor and Celeste (played as a teen by Raffey Cassidy, and later by Natalie Portman) are adolescent girls impacted by trauma and media attention. As an adult, Celeste is a blowsy older pop diva of the Lady Gaga or Ariana Grande school, prone to excesses of all kinds and gigantic temper tantrums. Her songs, written by Sia, are catchy paeans to self-empowerment that sound all the more hollow played against a crashing orchestral score by the late Scott Walker. Raffey Cassidy swaps roles to play Eleanor’s own daughter in the second act, while Martin portrays Eleanor at both stages of her life.

“It was really interesting because she’s a character who makes this very important decision at a very young age, which is to basically dedicate her whole life to her sister, to become her protector, and her enabler,” says Martin.

“In the first part of the film she’s a lot more open and quite curious, until the moment comes when she thinks she is going to lose her sister. The second part of the film, there’s no curiosity left. My aim was to be as unassuming as possible without, obviously, getting out of the frame. She’s one of those people who are always around but you’re not quite sure what they’re doing.”

It’s an odd role, she notes, defined entirely by other people, in a study of monstrousness that is at least as effective as the making of a dictator explored in The Childhood of a Leader. It requires remarkable restraint against the scale of Portman’s performance, where everything from her affected working class accent to her screaming fits is brash and bold.

“It was actually easier for me to hold myself down when Natalie was around because she gave me the leverage,” says Martin. “Once she came in with those very bold choices and moves, it gave me something to compare myself to. For example, there’s a scene which is just before a show, and she’s losing it and having a meltdown, so I have to be as unemotional as possible. It was like playing a game with the other actor. It was really quite fun to do.”

Today, Martin is back in London, where she shares a home with Daniel Blumberg, her partner since 2011 and an English musician who has released music under a variety of names including Hebronix, Oupa, Heb-Hex, and Guo.

She is, however, still mostly culturally French: “I drive the French way. That I’m sure about. I like driving quite fast and I get quite angry and I swear a lot.”

She’s also attached to Kirsten Dunst’s eagerly awaited and much-delayed adaptation of Sylvia Plath’s The Bell Jar. Last year, Elle Fanning, who has also signed on to appear in Dunst’s film, revealed that the project had stalled, telling the Hollywood Reporter, “There’s a lot of things happening with that. So it’s like yes, but no, but yes.”

Martin has no further updates. “Still don’t know,” she says.

We had one camera on Vox Lux. Ridley Scott had seven. You are completely surrounded by people, and it feels far more like an industry

Vox Lux was only her second American film and was certainly very different from her first role in the rather bigger budgeted All the Money in the World, Ridley Scott’s 2017 dramatisation of J Paul Getty’s refusal to co-operate with the extortion demands of a group of kidnappers from the organised crime Mafia group ‘Ndrangheta, after they abducted his grandson John Paul Getty III in 1973.

“We had one camera on Vox Lux,” she says. “Ridley had seven. You are completely surrounded by people, and it feels far more like an industry.”

She may be an art-house darling, but she wouldn’t necessarily say no to another Hollywood gig: “I’d love to do some big Hollywood film. I’d love to do the kind of film where you have to learn jiu jitsu or something like that. I think that would be quite nice.”

Vox Lux is released on Friday, May 3rd