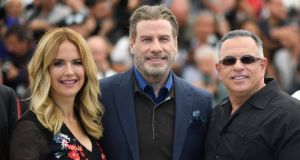 Nobody had any great hopes for Gotti, the long-delayed John Travolta-headlined biopic of the Mafia kingpin. But Kevin Entourage Connolly’s portrait of the Gambino family boss as a lovable dad has turned out to be the talk of the festival. Pitbull provided the film’s soundtrack, so what better way to mark its Cannes premiere than to bring out 50 Cent, an entirely different rapper? The Hollywood Reporter was one of several outlets questioning the festival’s artistic director, Thierry Frémaux, for programming the much-heckled film and for facilitating the rare spectacle of John A Gotti, aka Junior, who was reportedly acting boss of the Gambino crime family through much of the 1990s, standing onstage in a theatre that has been screening works by the likes of Yasujiro Ozu, Billy Wilder and Jacques Rivette. There was even more spectacle at the Rendez-vous with John Travolta event, where the actor compared Battlefield Earth to an unsold Picasso sketch. When asked about #MeToo and Hollywood he said: “The truth is I don’t know about it.” How could he have missed this entire story? Because he doesn’t care for such puny human concepts as race and gender; he’s a “citizen of the world”. And then, just when you thought it was safe to stop facepalming, the one-time Saturday Night Fever star started busting moves like your drunk uncle at a country wedding with, or possibly at, 50 Cent.

With mere days left on the Cannes calendar, the French resort is slowing down just as the protests are heating up. The Hollywood actor Benicio del Toro joined various Palestinians and Europeans at the festival on Tuesday in a demonstration against the Israeli army’s killing of Palestinians on the Gaza border. Sixty people were killed on Monday, according to the Palestinian health ministry, by Israeli gunfire or tear gas, in what Palestinian authorities called a massacre of protesters as they converged on the day the United States opened its embassy in occupied Jerusalem. On the Croisette hundreds of people held hands outside the Palestinian pavilion. Elsewhere the Lebanese actor Manal Issa, star of My Favourite Fabric, protested outside the premiere of Solo: A Star Wars Story, with a simple handmade sign reading “Stop the Attack on Gaza!!”

“Black is not my job”

On Wednesday a group of black and mixed-race women actors staged a red-carpet protest against industry racism and sexism. The group was led by the 16 French women who collaborated on the book Noire N’Est Pas Mon Métier (meaning Black Is Not My Job), a catalogue of horrors in which the Welcome to the Sticks star Nadège Beausson-Diagne recalls being asked if she spoke “African” at one casting. Writing on huffingtonpost.fr, her fellow contributor Rachel Khan said: “Between the maids’ and prostitutes’ roles I’m offered, for which the ‘African accent’ is required, there seems to be a new genre in cinema: the ‘less than life, next to nothing’. In short, movies that are below reality, where no black woman can be a doctor or a lawyer, or be crazy in love with someone. Where are we, and what year is this?”

Arriving more than a year after Nick Broomfield’s thorough documentary portrait Whitney Houston: Can I Be Me, Kevin Macdonald’s Whitney is rather late to the party. It does, however, make a shocking allegation against Dee Dee Warwick. According to one of her closest friends, Whitney Houston said that she was molested at a young age by Dee Dee Warwick, her cousin and the sister of Dionne Warwick. Whitney’s brother Gary may be corroborating the story when he says that he, too, was molested by a woman family member from the ages of seven to nine.

Burning
★★★★
Directed by Lee Chang-dong. Starring Ah-in Yoo, Steven Yeun, Jong-seo Jeon. Competition, 148 min
The Korean film-maker Lee Chang-dong and the Japanese novelist Haruki Murakami make for a dream team in this slow-burning thriller. Jongsu (a conpelling Ah-in Yoo) dreams of being a writer, but with a father in custody the only thing we ever see him compose is a petition on his delinquent dad’s behalf.

Me and John Travolta partying 😆 l swear l only came out here because of him. pic.twitter.com/naQXTMGnxr

As he wanders through a shoddy neighbourhood he comes across Haemi (the newcomer Jong-seo Jeon), a kooky young woman cheerleading outside a budget retail outlet. She recognises Jongsu from Paju City, the backwater where they grew up. She has clearly always had a crush on the guy, and they end up in bed.

Having agreed to feed her unseen cat – the first of many ghostly motifs – while she holidays in Kenya, Jongsu is blindsided when she returns with Ben (played by the Korean-American Steven Yeun, with a whiff of sulphur), a smoother, older guy with a Porsche and a swish apartment on the hip side of town. When he isn’t visibly bored by Haemi he’s smirking at her. Visiting Jongsu at the farm, Ben notices the North Korean propaganda channel blasting in the distance; “Fun,” he says.

During one of several straining encounters where Jongsu finds himself playing third wheel, Ben tells him that he has a hobby: he enjoys burning “ugly, useless” greenhouses to the ground. Haemi disappears soon after. Has Ben done something to the girl or is Jongsu’s jealousy getting the better of him?

There’s a palpable anger about the lack of opportunities faced by South Korea’s younger generation underlying Burning: Haemi, we learn, has considerable credit-card debts; Jongsu is looking to sell the only calf on his family’s farm. Lee takes his time moving towards an exciting final sequence, but there’s plenty of intrigue and resentment and terrific widescreen cinematography by Hong Kyung-pyo.

Under the Silver Lake
★★
Directed by David Robert Mitchell. Starring Andrew Garfield, Riley Keough, Topher Grace. Competition, 139 min
Oh, David Robert Mitchell! It was all going so well. The third film from the director of The Myth of the American Sleepover and It Follows is an unspeakable, faux-surreal mess concerning, well, secret codes in advertising, an underground network of homeless people, a naked murderess in an owl mask, a death cult for rich people, a songwriter who claims to have written every hit in history, from Earth Angel to Smells Like Teen Spirit, and a dog killer.

For about 20 minutes Under the Silver Lake is made bearable by Andrew Garfield’s committed turn as Sam, a creepy, jobless voyeur who spends his days ogling the breasts of an older parrot-keeping neighbour and the bottom of Riley Keough. Sam, for whom women appear to bark when they chastise him, may or may not be a local dog killer who may or may not progress to human victims. He’s certainly violent enough: when he catches two preteens vandalising his car he kicks them mercilessly.

That’s one of many, many issues with this dreary folly: there are no consequences for any action, no matter how awful. We hear pontificating about the use of sex in advertising and the entertainment industry (standard conversation snippet “She’s 12, but she’s an old soul”) yet the film’s women – one couldn’t call them characters – exist purely as objects. One is an arse. Another is a bullet-ridden pair of breasts floating, dead, in the water. At least Lars von Trier was going for revoltingly misogynistic.

There’s virtuoso camerawork from Mike Gioulakis and a tremendous score by Disasterpeace, aka Rich Vreeland, but it would be too kind to dismiss Under the Silver Lake as this year’s Southland Tales. It’s far too muddled and – worse – boring for that.