Marc Meyers’s My Friend Dahmer is adapted from the graphic novel by John Backderf, aka Derf 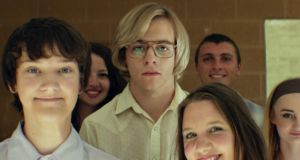 By the time the authorities caught up with Jeffrey Dahmer, in 1991, even the perpetrator was astonished by his crimes. “It’s hard for me to believe that a human being could have done what I’ve done,” he said, “but I know that I did it.”

A serial killer and sex offender, Dahmer became known in the tabloids as the Milwaukee Cannibal. He raped, murdered and dismembered 17 boys and men, sometimes preserving their body parts as mementoes, sometimes dabbling in cannibalism.

He has subsequently inspired books, plays, documentaries, a novel, by Joyce Carol Oates, and two rather glamorous biopics: The Secret Life, from 1993, and Dahmer, starring Jeremy Renner, from 2002.

Dahmer didn’t have to wind up a monster, if only the adults in his life hadn’t been so inexplicably, unforgivably, incomprehensibly clueless and/or indifferent

Marc Meyers’s My Friend Dahmer is a sobering riposte to these earlier, often sensationalised representations. The film is adapted from the autobiographical graphic novel of the same name, from 2012, by the cartoonist John Backderf, aka Derf, who had been friends with Dahmer at high school in the 1970s.

“The idea of a portrait of a serial killer as a young boy was interesting to me,” Meyers says. “I initially thought I was going to create a fictional story using composite details, a kind of road map towards becoming a serial killer. I was also, just separately, looking at graphic novels whenever I could. So when I came across My Friend Dahmer I thought it was a blessing. Here was the concept, but even better: a real story all laid out.”

Meyers eschews Backderf’s troubled omnipresent narration, but he remains rooted in the source material, by working certain panels into shots of the film and by honouring the author’s original intention as laid out in a prose introduction: “It’s my belief that Dahmer didn’t have to wind up a monster, that all those people didn’t have to die horribly, if only the adults in his life hadn’t been so inexplicably, unforgivably, incomprehensibly clueless and/or indifferent,” Backderf writes. “Once Dahmer kills, however – and I can’t stress this enough – my sympathy for him ends. He could have put a gun to his head.”

Backderf invited Meyers to stay with him after the director finished his first draft of the screenplay. “We drove around where they grew up, in Akron, and visited the high school they went to, and we talked a lot about that time. That stuff helped me figure out how the characters would really move through the exact spaces.”

Ohio locals were surprisingly welcoming of the production. Car collectors loaned period vehicles to the film. Others contributed period furniture and other props. Many were keen to share recollections that were worked into the screenplay.

“It’s 40 years later, so everyone there has pretty much moved on with their lives,” Meyers says. “All of the crew is from Ohio. The teenagers we used as extras had parents who went to school with Jeffrey Dahmer. They knew the book, and, like Backderf, some insisted that they had other friends who were stranger than he was in high school. All of them were horrified by what happened later in his life, but they did understand that there was a moment in time when he was just another teenager. He was maybe more troubled than they realised. But when the news broke, years later, it was a surprise to the friends he grew up with.”

The things they were saying were so mean, throwing around words like ‘faggot’. Teenagers can still be cruel, but there’s an awareness of how damaging words can be

Meyers’s film allows for its subject’s unhealthy preoccupation with roadkill and the confused murderous desire he feels for a local jogger, yet it studiously avoids the more horrific aspects of the story. His Dahmer, like Backderf’s, exists in broad daylight, as he puts it.

“I’m not an expert in serial killers,” Meyers says. “Like everyone else, I’m attracted to true crime stories, and I’ve watched Making a Murderer and those sorts of entertainments. But I’m not one of those people who devours books on serial killers. Everything in the movie came out of the book. We really only cared about the guy in high school up to graduation. So I stayed within that framework.”

Consequently, in My Friend Dahmer, Jeff Dahmer – brilliantly played by the former Disney star Ross Lynch – is an awkward teenager struggling to make it through high school with a severely dysfunctional family. He barely copes with his unstable, uncaring mother, who is played by Anne Heche, and at school he drinks and fakes seizures and “spaz-outs”, antics that win over a group of other outsider teens, who form the Dahmer Fan Club, headed by Derf Backderf. But Dahmer remains a lonely and increasingly damaged kid.

“On set I realised we were making a politically incorrect film,” Meyers says. “Because they’re so politically incorrect by our standards. That felt oddly refreshing. The things they were saying to each other were so mean, throwing around words like ‘faggot’. Teenagers can still be cruel, but there’s an awareness of how damaging words can be. We really have progressed as a species, in that we are sensitive to the different kinds of people around us. They aren’t.”

There has been much positive chatter about My Friend Dahmer’s countercasting. The actor who plays Derf, Alex Wolff, came to prominence starring alongside his older brother Nat in the Nickelodeon musical comedy television series The Naked Brothers Band. Ross Lynch gained recognition as Austin Moon on the Disney Channel show Austin & Ally and with the family band, R5.

“A Disney kid doing Dahmer? It’s an easy contrast,” Meyers says. “But look at the talent that has emerged through the Disney Channel. Look at Ryan Gosling, for example. The Disney Channel is full of talented workaholics, who are professional from a very early age. I knew it was a big pool of talent. But when we sat down with Ross I just enjoyed talking to him.

“Like most kids that age, unless they’ve heard his name in a rap song, he wasn’t even aware of Jeffrey Dahmer. We met over 100 actors. A handful selected themselves for reasons of likeness. But he was different. He was very present. He’s a dancer originally. He studied Dahmer on YouTube. He knew the posture and the gait. He thought through the spazzing, all the physical stuff. He was perfect.”