Book Club: Don’t be fooled by the great actors. This is an awful film

Review: It has the stupidest premise you’ll encounter outside a Schwarzenegger comedy 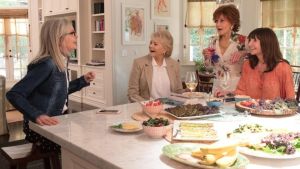 Don’t worry that this awful film has the stupidest premise you could expect to encounter outside an Arnold Schwarzenegger comedy. Fret not that the high concept insults the intelligence of four deservedly legendary actors.

The film-makers seem to agree and, after giving that premise half a chance, they take it out back and quietly drown it.

Sadly, there are other things to get annoyed, confused and bored about. Book Club is another of those “grey pound” films that, far from honouring older people, has fun treating them as blundering ninnies.

It’s nice to see Jane Fonda, Candice Bergen, Diane Keaton and (relative teenager) Mary Steenburgen above the title. It’s a shame they are asked to do nothing they couldn’t do while still asleep.

Anyway, what about that high concept? Those four women play old pals who – because it provides the film with a title – spend one day a week discussing some book or other. Fonda runs a luxury hotel. Keaton has been recently widowed. Bergen is a judge. Steenburgen is having sexual problems with her otherwise loyal husband.

It’s a funny world. Modern cinema can populate whole planets with aliens and dinosaurs, but it can’t photoshop an image of these stars as young women into one convincing image. A 12-year-old armed with a pair of nail scissors and a 1978 edition of Photoplay could have provided a more convincing collage than what they offer us after the credits.

Nonetheless they really have been friends forever and – despite their apparent intelligence – are looking forward to reading EL James’s Fifty Shades of Grey together.

Bergen was once in Carnal Knowledge. Keaton was in Looking for Mr Goodbar. Fonda was in Klute. Forget all that. We are expected to believe that these versions will whoop, swoon and cackle at the semi-literate, vanilla abuse in James’s already-passé clumps of lavatory paper.

They will do more. Reading the book prompts them to take control of their (fantastically privileged) lives and move towards adventure. So, Fonda snuggles up to Don Johnson, and Keaton snuggles up to Andy Garcia.

No, it doesn’t make any sense to me and, if developments in the last act are any measure, it doesn’t make any sense to the people who wrote what passes for a script. Having apparently forgotten about the club, the gang comes together one last time and, squinting unenthusiastically at volume three of the trilogy, decides that the books are nonsense and that they reveal nothing about their situation.

You’ll get no argument from me, but isn’t this as if, halfway through The Great Escape, Steve McQueen and Richard Attenborough decided to give up on the tunnel and enjoy Christmas in the camp? Nobody forced you to build a film around this idiotic notion.

We’re left with the resolution of various dilemmas in the most predictable manner imaginable. Will Mary and her husband sort out their sexual uncertainties? Will Diane get over her reluctance to move on? Will Justice Bergen pick the right guy on one of her ill-advised, mordantly unfunny computer dates?

If I ram pencils in my eyes will I be spared the outcome of the scene in which Mary spikes her husband’s beer with Viagra?

One cannot sincerely argue that these great actors put their shoulders to the wheel. Keaton does the best job of maintaining dignified enthusiasm while enduring gags that Mrs Brown would think too roughly hewn.

In contrast, a haughty Fonda delivers her dialogue as if tonguing pieces of rancid fish onto the back of her fork. She remains dignified. But she clearly doesn’t want this stuff sitting in her mouth for too long.

More power to her.