Anne Hathaway: ‘I took lockdown seriously. I gave myself a haircut’ 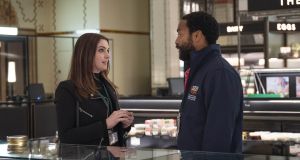 Anne Hathaway and Chiwetel Ejiofor in a scene from Locked Down: “I think Chiwetel did an amazing job of channelling his inner Cary Grant.”

Go-getter executive Linda (Anne Hathaway, exuding the kind of neurosis that made Rachel Getting Married fun) and former convict-turned-courier Paxton (Chiwetel Ejiofor) evidently have nothing in common and have decided to separate. Lockdown, however, forces them into cohabitation, an arrangement that’s made trickier by cabin fever, constant Zoom calls, and secret smoking.

Romantic rekindling begins when Paxton’s religious geezer boss (Ben Kingsley) forges a security badge to allow Paxton admission to Harrods, just as Linda, in an absurd coincidence, is tasked with clearing out a fashion inventory and a giant diamond at that very same store.

The relationship-driven capering is a kind of homecoming for director Doug Liman, who first came to fame with Swingers and Go. And, in common with Swingers, he shot the entire film in 18 days. That’s all the more extraordinary when one considers that Steven Knight’s script ran to 180 pages; roughly the same number as the screenplays for Stanley Kubrick’s Barry Lyndon and Joseph L Mankiewicz’s Cleopatra.

“I’ve never been so happy that my parents raised me on Rosalind Russell films,” says Hathaway of the Gypsy star. “Watching all those fast-talking dames served me well for this film. I kept thinking about films like His Girl Friday. And that gave me the freedom to be like a hummingbird on a set that was already fast. It was practical. When I read the first 90 pages of the script, I thought I was at the end of the second act. But no. That was only the first act. So it became a point of survival. We had to get through pages of very dense dialogue very fast.”

She laughs: “And I think Chiwetel did an amazing job of channelling his inner Cary Grant.”

The weighty script was the least of Locked Down’s problems. The entire project was written, financed, and filmed entirely during the pandemic. Director Liman had to fly himself to London in a tiny propeller plane for the shoot.

“Just being able to go on set, make a film and see the cast and crew and work with people and do what is – after all – our profession, was so gratifying,” says Ejiofor. “Because for months our industry was completely shut down. It was wonderful to respond to the lockdown by getting out there.”

“It was never lost on us that we were the privileged few,” adds Hathaway. “Millions of people wanted to work and couldn’t. I’m never a fan of moaning on film sets. There’s too many people who want to do this. But to get to do this in this year at this particular time? It felt like it would be shamefully disrespectful to everybody else to complain about anything.”

Locked Down, however, is set and was shot, as the title suggests, during lockdown in London. Scenes depicting Ejiofor walking to the shop in a mask were shot when mask-wearing was a real-world requirement. Scenes depicting Hathaway’s character on Zoom calls to Ben Stiller are actual Zoom calls. Scenes wherein Ejiiofor’s character, in a burst of pent-up energy,  booms  a dramatic reading of DH Lawrence’s poem Stand Up! at his neighbours have roots in genuine pent-up energy.

The ripped-from-the-headline authenticity required a near-miraculous turnaround. On July 1st, 2020, Liman and Knight were on a call, discussing a different project. As an afterthought, producer PJ van Sandwijk suggested a Covid heist movie. Maybe Knight could write and Liman could direct in September? A final cut was readied by December.

“Normally you would dismiss that idea,” says Liman. “But we’re at a moment in time when the world has been turned upside down, there’s no such thing as a crazy idea.”

Speaking to this newspaper last month, Sam Neill confirmed that Jurassic World: Dominion had spent $5 million on Covid-19 safety protocols.  Last January, following his famous scolding of film crew who flouted Covid protocols, Tom Cruise reportedly paid a great deal of money for two high-tech mobile robots to enforce coronavirus safety protocols on the set of Mission: Impossible. Anne Hathaway didn’t take that kind of financial hit, but she did face a grooming crisis that almost every lockdown veteran can identify with.

“I took lockdown very seriously,” says the actor. “As long as I promised to stay home and that I was staying in and only going to set, I was allowed to be quarantining in two locations. I wasn’t able to do anything else. I took it so seriously that, during lockdown before the film, I looked at my hair and realised that I – and it – had gone too far. So I gave myself a haircut. And when the film started shooting I thought my hairstylist would be able to give me a professional ‘do. But it turned out he didn’t cut hair.

“He asked me if I wanted someone else to come in and clean it up. But I was so freaked out at the thought of being in contact with someone who wasn’t in our film bubble. So I said no. And my hair felt very 2020.”

She found some compensation in Harrods. The lockdown last March was the first time in its 170-year history that Harrods had closed for longer than a few days, but during filming the department store was open and operating daily. The film took over, in social bubbles, at night, with many shop staff volunteering as extras. Both Hathaway and Ejiofor enjoyed the complicated tunnels that run under Harrods. She also liked being above ground.

“We were in Harrods all night every night for about a week or so,” she recalls. “I was excited about shoes. I think I explored every single shoe department. When it was all over I bought myself a pair of shoes. They were flats because of lockdown. Anything else would have been an optimistic 2021 purchase.”

Locked Down is released on March 11th on PVOD