The actor on roles including Gone Girl and I Care a Lot, for which she just won a Golden Globe

Drama 'Nomadland' and satire 'Borat Subsequent Moviefilm' won movie honours at the Golden Globes on Sunday in a mostly virtual ceremony that was marked by pandemic conditions and calls for more diversity. Video: Reuters 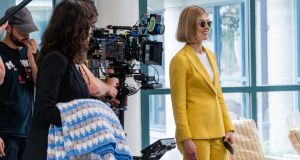 In “I Care a Lot,” Rosamund Pike plays a legal guardian who uses the court system to separate elderly people from their money.Photograph: Seacia Pavao/Amazon Prime

“There are two types of people in this world,” says the coolly assured voice of Rosamund Pike, playing Marla Grayson, in the opening voiceover of I Care a Lot as the camera slowly pans over the dazed-looking inhabitants of a nursing home. “The people who take, and those getting took.”

From the first shot of the back of Marla’s razor-sharp blond bob, it’s clear which category she belongs to. A ruthlessly amoral and icily self-assured con woman, she plays the role of a conscientious, court-mandated guardian perfectly, all while deftly separating the elderly wards under her care from their families and bank accounts.

Pike, the British actor best known for her Oscar-nominated performance in Gone Girl, is the blazing star of I Care a Lot, for which she has just won a Golden Globe, for the best performance by an actress in a musical or comedy. As Marla, she is both chillingly villainous and seductively fearless, a true antihero doing very bad things with relish.

In Gone Girl I was allowed to show every part of being a woman – to be extreme, dangerous, sweet, compliant, vulnerable. It was the first I could achieve a freedom onscreen that I had only previously felt onstage

“Marla is like a scrappy street fighter in designer clothing,” Pike says on a video call from Prague. “It was a deep dive into finding a place where I could own the hunger for money, the hunger to win, the conviction that your own goal is more important than anything else.” All are traits “that aren’t often portrayed by women in film,” she adds.

Pike, who is 42, is disarmingly beautiful, with flawless peaches-and-cream skin and smooth blond hair. Articulate and thoughtful during the interview, she considers questions carefully, occasionally going off-piste: “I wish I could ask you some questions,” she says at one point.

Pike, who found early limelight at 21 as a Bond girl, in Die Another Day, has had a successful acting career for more than two decades, but she has never acquired – or apparently aspired to– the megafame of some of her peers. Perhaps that’s because although she might have successfully specialised playing the English rose (see her turn as Jane Bennett in Joe Wright’s 2005 Pride and Prejudice), Pike has never allowed herself to be pigeonholed by prettiness. She has spoofed the British spy film in Johnny English Reborn, acted opposite Tom Cruise in the action thriller Jack Reacher, and played a hilariously clueless socialite in An Education, the hard-bitten reporter Marie Colvin in A Private War and the enigmatic Amy of Gone Girl.

Pike grew up in London, the only child of two opera singers who spent a lot of time on the road as they travelled from job to job. She says she knew she was going to be an actor from about the age of four. “You grow up in a creative household and you assimilate that,” she says. “Adults to me were people who could play and tell stories in compelling ways. I would sit for hours in rehearsals for operas and work out why I believed things, or why I didn’t. I found a kind of magic in the theatre; it felt like a good place where I belonged.”

She did not do much about it, she says, until she was 16, when she saw a flyer at her school for the National Youth Theatre, a British institution that has built a reputation for producing actors like Daniel Craig, Colin Firth and Helen Mirren. Pike auditioned, was accepted and spent the next two years performing with the group, eventually playing the heroine in Romeo and Juliet.

Her performance as Juliet won Pike an agent (whom she is still with), a fact she kept quiet when she went to Oxford University. “I would secretly go to London to audition for things I mostly wouldn’t get, and wonder, Is he going to give up on me?” she says. Pike also acted at university – “a hotbed of opportunities to fail”, she dryly calls it.

She travelled for a bit after graduation, returning in time to audition for the Bond movie. “I was all shaggy-haired, in a cardigan and old jeans,” she says. “I couldn’t have been less appropriate, but luckily they could see beyond that.” Although she was praised for her part in the movie, however – her first film role – it opened few doors, Pike says.

She returned to stage work, performing in Terry Johnson’s Hitchcock Blonde at the Royal Court, which she describes as a career highlight. Since then, however, she has mostly worked in film, and has been drawn to characters based on real-life figures, including Ruth Williams, the wife of Seretse Khama, the first president of Botswana, in A United Kingdom, Marie Colvin in A Private War and Marie Curie in Radioactive.

“She could have easily kept playing a beautiful blonde, the object of desire,” says Marjane Satrapi, the director of Radioactive. “That would have been easy for her, but instead she has taken on roles that are each more challenging than the other. She is an actress who is not scared of getting old, who thinks this is interesting.”

It was 2014’s Gone Girl, though, that proved to be Pike’s breakthrough role. “It gave me the chance to learn more about screen acting than I ever had before,” she says. “I was allowed to show every part of being a woman – to be extreme, dangerous, sweet, compliant, vulnerable. It was the first I could achieve a freedom onscreen that I had only previously felt onstage.”

The character of Marla Grayson in I Care a Lot shares certain traits with Amy – notably the deployment of femininity as both a weapon and a performance – but Pike was slightly indignant at the suggestion that the characters were similar. “I saw them as totally different,” she says. “I would never want to do a sub-Gone Girl. To me, Marla was more a shoot-from-the-hip, think-on-your-feet person.”

“It was important to us that this was fun for audiences and that the darkly comedic side was rooted in truth,” she adds. “What are the values in America? What earns you respect? Money.” She thinks for a bit, then smiles: “Being able to relish and watch in appalled horror and glee – people like that.” – New York Times

I Care a Lot is available to stream on Amazon Prime