A Star is Born: Bradley Cooper’s film is the third – arguably fourth – remake of the same movie

Will the new Lady Gaga film make as much cash as the Barbra Streisand version? 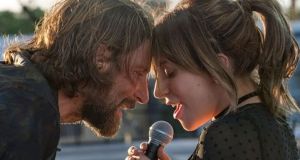 Bradley Cooper and Lady Gaga in A Star is Born, 2018

Never mind adaptations of novels, plays and stories. As Bradley Cooper’s triumphant variation on A Star is Born – showcasing a revelatory turn by Lady Gaga -- makes its ways into cinemas, we might reasonably wonder if this old war-horse is the most adaptable of all Hollywood’s original creations.

There are now four official versions. Three of those were critical hits. We’ve yet to see how Cooper’s will fare at the box office – expectations are sky high – but the other three raked in the cash. Yes, even the supposed Barbra Streisand fiasco. Directed by journeyman Frank Pierson, produced by Streisand’s sometime squeeze Jon Peters, that film was the third-highest US “grosser” for 1976. The critics could bandy the words “vanity project” as much as they wished. Streisand’s bankability was undamaged.

Some film historians would argue that the story is even more durable than the previous paragraph suggests.

Twenty-two years before he directed the 1954 version, the great George Cukor made a well-received – though only modestly successful – picture entitled What Price Hollywood? It concerns a drunken older film director who happens upon a young woman in a restaurant and, impressed by her charm, helps her become a movie star.

As her career snowballs, he slumps into ethanol-fuelled decline. His behaviour fouls up her victory at the Academy Awards. Eventually, aware that he is now a drag on her success, he decides to set her free in the most ruthless fashion.

Anyone familiar with William Wellman’s A Star is Born, made just five years later, or with Cukor’s own version will, reading that synopsis, understand why What Price Hollywood? is increasingly regarded as the unofficial first incarnation.

All those story elements remained in place. Cukor was actually offered the first A Star is Born, but, struck by the similarities with his own film, moved towards a fine David Copperfield instead. RKO, the studio behind What Price Hollywood?, considered a plagiarism suit, but eventually backed down.

At any rate, we are left with four official incarnations that, though buffeted by their respective era’s concerns, remain remarkably similar in tone and narrative. A female ingénue falls into the orbit of an older, drunken star. She ascends. He sinks into pathetic embarrassment. Certain key scenes reappear.

In 1954, James Mason, the charismatic Norman Maine in Cukor’s huge Technicolor musical, accidentally bops Judy Garland in the face at the Oscars. Cooper’s new version finds the director, front and centre as rock star Jackson Maine, doing something even more embarrassing to Gaga at the Grammys. This will go on forever.

Wellman’s 1937 film is probably the least well known. The first colour film to be nominated for best picture at the Oscars, it stars the already much-loved Janet Gaynor (all the female leads have, playing down a little, been in their thirties) as the North Dakotan rube Esther Blodgett.

Bringing a more convincing fragility to the role than any later incarnation, Fredric March is all brittle charm as the first Norman Maine. Dorothy Parker, a credited screenwriter, later admitted that she contributed little to the finished work, but the piece exhibits a cynicism about the business that would surely have met her approval.

To this point, Cukor’s 1954 A Star is Born has been the most celebrated. Enormously expensive, much cut and much restored in future incarnations, it profits from a brilliant, but endlessly problematic, performance by Garland. Only 32, but already a veteran, the actress was slipping into the sort of chemical decline that Mason enacted so effectively.

He survived suavely for another 30 years. It was Garland, a nightmare on set, who was in need of assistance. That irony adds undercurrents to the film’s final tragedies. The vicious analysis of the star-making machinery helps explain what drove Judy to an early death at just 47.

The Streisand version has yet to encounter much positive re-evaluation. Neither Kris Kristofferson nor the female lead is bad exactly, but everything about it seems a half-an-octave out.

Though Streisand was (and is) an enormous star, she came at the business through the Great American Songbook, the Broadway musical and middle-of-the road smooch. It never made sense that such a singer could forge a career in the contemporaneous rock scene. Yet the familiar romantic dynamic functions well enough.

For his directorial debut, Cooper took the surprising decision to return to the milieu of the least celebrated version: the rock scene. Against the odds, he has made the film that Pierson, Peters and Streisand should have shot 40 years ago. Gaga acts against type as an ordinary girl from the boroughs. Cooper is a fading, but decent, country rocker straining beneath a painful mass of family problems.

So what makes this tale endure?

More than anything, it is the complementary mathematics of the characters’ story arcs. The older man is still just holding on when they meet. They briefly hit the same point as she ascends and then negotiate heaven and hell from different rooms of the same mansion.

There are some uneasy gender dynamics that allow contradictory interpretations. Yes, the story is a version of Pygmalion with Norman Maine (or whatever he’s called this year) as the manipulative Henry Higgins and Esther (or whatever) as Eliza Doolittle.

But Maine is also a self-pitying loser who exemplifies the more passive impulses of what we now call “toxic masculinity”. Calibrate those politics however you choose.

The environment also allows analysis of how the movie industry and the rock industry digests humanity and excretes money. The material is inexhaustible.

The real surprise is how little successive film-makers have altered the original template (tracing that model beyond the Wellman film to What Price Hollywood?).

There’s a great spoof trailer doing the rounds recasting the current version with Kermit and Miss Piggy. Watching the recent French movie Souvenir, I found myself longing for a gender-swapped version with Isabelle Huppert.

You never know. There’ll be another one along in a moment.

Inside the dark web: ‘The truth is there is a lot of evil out there’
9