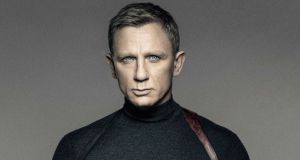 These pages have, in recent months, been much taken up with discussion of the candidates – some admirable, some outright cranks – vying for a ceremonial office that requires the holder to obediently sign off on decisions made elsewhere.

Does this joke work? Is it clear that I am drawing comparison between the Irish Presidency and director of the next James Bond film?

Media chatter over the 007 job is almost as fierce as that concerning the next manager of the England football team. Cary Fukunaga doesn’t count as the Sven-Göran Eriksson of the Bond franchise. Foreign directors such as Lee Tamahori and Marc Forster have already worked on this very British institution. But Fukunaga is the first ever American to helm a film in the official sequence (you can keep your Never Say Never Again addendum to yourself). The special relationship really is more important than ever after Brexit.

Why do so many Bond fans give a hoot? If we know anything about the sequence it is that Michael G Wilson and Barbara Broccoli, long the films’ producers, are the ones with all the creative muscle.

The series’ change of direction with Casino Royale in 2006 had little to do with director Martin Campbell. Wilson and Broccoli, controllers of Eon productions, had, after all, first hired Campbell to direct the jokey, camp Goldeneye over a decade earlier. He wasn’t the one calling for a serve towards Bourne Grove. That tone was sustained – with varying degrees of success – in a later film by Marc Forster and two more by Sam Mendes.

The self-defenestration of Danny Boyle from the upcoming 25th episode is still shrouded in some mystery. But it looks as if the Mancunian director’s efforts to make the film he wanted to make were resisted at every corner. “Michael G Wilson, Barbara Broccoli and Daniel Craig today announced that due to creative differences Danny Boyle has decided to no longer direct Bond 25,” the statement read.

Boyle came with a nascent new script co-written by his frequent collaborator John Hodge. Even before the announcement of his appointment, Boyle was talking about shaking up the franchise. “It’s a great idea so hopefully it will work - would love to be able to tell you more, but I’m not going to,” he said.

Boyle made noises to suggest that #metoo and #timesup would be addressed. “You write in real time,” he said. “You acknowledge the legacy of the world of Bond and you write in the world – but you also write in the modern world as well.” Did we hear murmurs of unease from Eon? Just the wind, I’m sure.

At any rate, Boyle’s Velvet Revolution was soon over as the regime sought to re-establish control. Reports emerged that Neal Purvis and Robert Wade, who have been writing Bond films since 1999, had been returned to their position behind the typewriter as Mr Hodge’s script followed Boyle out the window.

Order was fully re-established with the appointment of Fukunaga last week.

The decision is well-timed. A day or so after Cary’s unveiling, the science-fiction series Maniac debuted to some acclaim on Netflix. A dark comedy with a frantic edge, the show details the results of a pharmaceutical trial on two troubled patients. Emma Stone and Jonah Hill star in a show – directed by Fukunaga, written by Patrick Somerville – that takes in every imaginable popular genre. It plays like an audition for all active franchises.

Even before the release of Maniac, Fukunaga had a distinguished and varied record. He first caught attention with the searing drama Sin Nombre, the tale of a young Honduran immigrant fighting for survival in Mexico. Then came an adaptation of Jane Eyre and – his real breakthrough – the hugely acclaimed first series of True Detective.

Tongues really began to wag when, following last week’s announcement, Bondistas noticed that Beasts of No Nation, Fukunaga’s last feature, starred Idris Elba and that the director had talked up that actor’s credentials as Bond.

Don’t get your knickers in a twist. As we have noted in this place before, Elba is already a little old to start the role and Daniel Craig, still an executive producer on Bond 25, will, barring unimaginable catastrophes, be taking the Aston Martin round the block one more time.

Fukunaga was on few shortlists of potential directors. There was a lot of chatter about Yann Damange, director of ’71, and many hoped that Susanne Bier’s work on The Night Manager would earn her a phone call.

Wearing our hindsight spectacles, we can now mark Fukunaga as an obvious choice. Never mind his work on Beasts of No Nation or Sin Nombre; focus on his credentials as a director of high-end television. In that world – often dubbed a “writer’s medium” – the director traditionally has less freedom to influence the wider aesthetic.

Fukunaga’s work on True Detective was vital to its success, but, rightly or wrongly, the auteur was seen to be writer Nic Pizzolatto. David Simon did not direct a single episode of The Wire, but he is still scene as the creator of that series.

This is not to suggest that Fukunaga is any sort of pushover. A highly educated man with a taste for critical analysis, he is sure to think carefully about every creative choice.

But there is no sense that he’s coming in to give the franchise any sort of vigorous shake. Nearly 20 years Cary’s senior, Danny Boyle seemed much more interested in battering the venerable franchise to his own ends.

So, we know what Broccoli and Wilson stand to gain from the appointment. A steady ship. A safe pair of hands. The release has been kicked from October 2019 to February 2020 and Cary doesn’t sound like the sort of fellow to cause any further delays.

But what – aside from a whopping paycheque – does Fukunaga stand to gain? The role of (their words, not mine) “Bond girl” has long been seen as a career killer. Few directors have profited much from the position either. Terence Young and Guy Hamilton are still best known for, well, James Bond films. Sam Mendes came to the series after a slack period and has directed not a single feature since the so-so Spectre.

Only Cary can answer that question. Oh well. There are worse ways of spending 2019. The circus continues.

Lewis Capaldi: ‘I’m not Justin Bieber or Ed Sheeran – I’m not getting chased down the street’
9