Review: Close is favourite for the best actress Oscar – just ahead of Lady Gaga 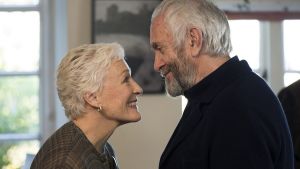 Glenn Close and Jonathan Pryce in The Wife

It’s 1992 and Joan Castleman (Glenn Close), the long-suffering wife of a much-lauded American novelist, Joe Castleman (Jonathan Pryce), travels to Stockholm, where her husband will receive the Nobel Prize for Literature. It’s a moment of triumph that unexpectedly leaves all parties reeling, with just a little prodding from a fanboy journalist eager to write Joe’s autobiography (Christian Slater, excellent).

He’s a wily fellow, but he’s no match for the unflappable Joan. While her philandering husband soaks up the attentions of the young Swedish photographer (Karin Franz Korlof), Joan simmers through her chill exterior.

He soon leaves his wife and baby to marry her, the first in the series of deceptions that characterise the marriage.

In 1992, their children – including Susannah (Alix Wilton Regan), who is about to give birth, and David (Max Irons), a budding writer desperate for his father’s approval – are grown up, begging the question: why is Joan still with his guy? The answer will make Joe’s macho author swagger even less appealing to behold.

Convention presentation, a reliance on interiors, and unfussy camerawork from Ulf Brantas ensure that all eyes are on the performances. That’s as it should be.

Oscar season is here again, with Glenn Close – the bookies’ favourite for the best actress gong (odds currently around 11/4, putting her just ahead of Lady Gaga at 4/1) – leading the change. The actor, who has been nominated six times for an Academy Award without winning, puts in a bewitching, clever, subtle turn that, while less showy than the fireworks required for Dangerous Liaisons or Fatal Attraction, represents some of the best work she’s done. She’s assisted by a remarkable ensemble, particularly Pryce, who brings some blustering humanity to a lifelong rotter.