Night School: As idiotic as you’d expect a Kevin Hart film to be

Review: This would be hilarious if didn’t play out with such depressing inevitability 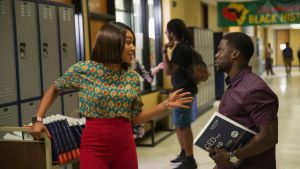 Following her stand-out turn as the least terrible part of last year’s Girls Trip, Tiffany Haddish – an irrepressible LA comic – has found herself at the centre of a media whirlwind. If you’re not looking forward to her turn opposite Elisabeth Moss, Common and Domhnall Gleeson as one of several wives to incarcerated Irish-American hoodlums in the upcoming The Kitchen, then you haven’t been paying attention. She’s also in…

Oh, we can’t avoid the subject at hand forever. Arriving in the most moribund month of the cinematic year, Night School is every bit as idiotic as you’d expect a Kevin Hart film with this plot to be.

The diminutive comic plays an underachieving Atlanta man who, after accidentally burning down his place of employment, signs up at (ahem) night school with a mind to passing a high-school equivalency test. On the way to school, paused at traffic lights, he has a fight with a sharp-tongued young woman in a convertible. She turns out to be the teacher. She turns out to be Ms Haddish. Ha ha!

This stuff would be hilarious if it didn’t play out with the depressing inevitability of a late-August forest fire.

Everyone else in the class has a broad comic trait. One of them is obsessed with being woke and – are these things connected? – worried about the advance of robots. The misused Mary Lynn Rajskub plays a mom who is underappreciated at home (though only a little) and sees the class as a route to liberation. Did you suggest there were the makings of a sitcom from this material? There is. It was called Community and the people behind that show should be fuming.

Stretching each routine out to criminal overextension, the picture (which somehow lists six screenwriters) fluffs its few promising turns and leans heavily into its most overused cliches. One sequence, in which the gang consider leaping from one roof to another, moves at the pace of that Spanish film about an artist watching a tree grow.

The incessant combination of electric piano and Hammond organ – alerting us to things we might not suspect are meant to be amusing – eventually takes on the grating quality of an unquiet baby on a flight to New Zealand.

Sadly, Haddish gets little chance to excel with a part that, though sizeable, is so colourless it flattens even her famous vivacity.

Still, we did get to mention Víctor Erice’s The Quince Tree Sun in a review of a Kevin Hart film. That doesn’t happen every day.

The Music Quiz: Who is the world’s most sampled music artist?
9

The Comey Rule review: You actually begin to root for Trump
10