Nureyev: He could be brutal, hitting and kicking dancers 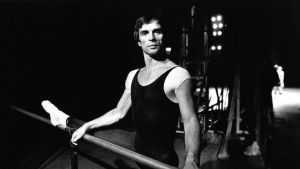 Rudolf Nureyev: even when he wasn’t trying to lash out, he could do harm. Photograph: Getty

If there is one scene you cannot miss this year, it is the sight of Rudolf Nureyev and Margot Fonteyn being “detained” in a San Francisco police station in 1967. Their crime? Attending a party at which there were narcotics.

The look on their faces, a marriage of bemusement and imperiousness, is something to behold. Even the cops look vaguely terrified as Fonteyn adjusts the collar on her fur coat. Tremble puny humans; your betters are here.

Using much the same formula as Asif Kapadia’s Amy Winehouse documentary, this terrific, beautifully curated new documentary from Jacqui and David Morris – the siblings behind McCullin, the Bafta-nominated 2012 portrait of the war photographer Don McCullin – use archive footage and off-camera voices to chronicle the dancer’s journey from his war-torn childhood in the Soviet Union to global celebrity.

The Rudolf Nureyev Foundation gave the film-makers access to about 20 boxes of old VHS tapes, including unseen footage of his more avant-garde performances. His early years, meanwhile, are illustrated by interpretative dance sequences choreographed by Russell Maliphant. It’s a risky strategy, but it works rather well.

Chapters are delineated using quotes from The Second Part of Henry IV, WB Yeats and, on one occasion, Queen Elizabeth II (“Grief is the price we pay for love”). His stormy relationship with the Danish ballet star Erik Bruhn is explored, but it’s Fonteyn who turns out to be the great love of his life. Her biographer Meredith Daneman movingly describes a final meeting in which they “were heartbroken at the sight of one another”.

They were quite the anti-authoritarian pair, he having defected from the Soviet Union in a strop, she having caused no little controversy in 1959 when she and her husband attempted to stage a coup d’etat against the Panamanian president, Ernesto de la Guardia.

As the violinist Yehudi Menuhin observes, Nureyev’s partnership with the Royal Ballet’s prima ballerina transformed Nureyev from a lion to a panther. Even towards the end of his life – Nureyev died in 1993, aged 54 – the star is often characterised as a beautiful animal, an effect reinforced by such disco-era wardrobe items as knee-high snakeskin boots.

He could be brutal. One story relates the delight of a young page upon being told by Nureyev to “f**k off”; others briefly mention his penchant for hitting and kicking dancers.

Even when he wasn’t trying to lash out he could do harm. His dominance on the London stage, for example, meant that “a whole generation of English dancers was wiped out”.

Mostly, the Morrises gloss over the tantrums and let Nureyev, as an artist and as Dick Cavett and Michael Parkinson’s witty chatshow guest, do the talking. A few of the narrators gush and swoon. They don’t need to. As Fonteyn had it: “Genius is another word for magic, and the whole point of magic is that it is inexplicable.”

Michael Kiwanuka: ‘If you’re a creative, you don’t try and be that, you just are’
9