Unthinkable: Calling something evil is not a licence to shut down debate 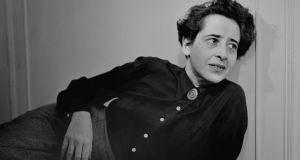 Tomorrow (Friday, Dec 4th) is the 45th anniversary of the death of Hannah Arendt, the German-born political theorist who famously grappled with the question of evil. Her reports for The New Yorker on the trial of Nazi war criminal Adolf Eichmann were revolutionary in form and content: a journalistic-philosophical mash-up that helped to redefine our understanding of right and wrong.

Her use of the phrase “the banality of evil” in the context of Eichmann and the Holocaust was highly controversial. She was accused of being naïve in interpreting his motives and insensitive to her fellow Jews. But she was making an important point – with some courage under the circumstances – about the universal human potential for dehumanisation.

Today she remains a reference point for theoretical discussions of evil. The concept remains contentious. Calling a terrorist atrocity or some other crime “evil” can be used as a means of shutting down debate about underlying causes. Yet avoiding the word altogether seems like denial. Labelling certain atrocities as merely “very wrong” smacks of an insult.

Australian academic Luke Russell has examined the topic for many years and in his latest book Being Evil: A Philosophical Perspective he tries to answer the definitional question once and for all.

This may seem “a fairly complex definition,” he adds, “but the general idea could be captured in the following slogan: evil actions are extreme culpable wrongs”.

What did Arendt mean by the “banality of evil”?

“When she talks about the banality of evil she is changing her own view. Initially she believed the horrors of the 20th century, the Holocaust, could not have been produced by ordinary motives. She thought this was a new kind of wrongdoing, a kind of radical evil. And she expected when she planned to attend some of the trial of Adolf Eichmann in Jerusalem that she would see a perpetrator who was ‘monstrous’ in her words…. malicious, acting out of hatred, perverted and sadistic and knowingly doing what is wrong.

“That’s Arendt’s phrase to capture this change of view. But we’ve got to be really careful in interpreting Arendt. When she talks of the banality of evil she didn’t mean an evil action is unremarkable or ordinary. She instead meant that evil actions – the most morally horrendous wrongs – can come from ordinary motives and she thinks that an evildoer might be quite similar to you or to me, rather than a monstrous aberration who is psychologically quite unlike us altogether.”

She said it was possible to carry out evil thoughtlessly? Was she right about that?

“She describes Eichmann as having performed these actions thoughtlessly and I think now the evidence is clear she was wrong about Eichmann himself.

“But it’s a really interesting question as to whether there are other people who fit that profile of a thoughtless evildoer. These might be bureaucrats, who might be less centrally involved in what’s going on, who don’t think about the consequences but are focused on internal projects or other goals.

“I think thoughtless evildoing is possible but I think it’s more rare than Arendt might think.”

Arendt was criticised for trying to understand Eichmann as some people saw this as an attempt to “explain away” his actions. Can all evil be explained?

“I think the way people have discussed the connection between understanding someone’s motives and either excusing that person or justifying the action has been a bit confused. There are lots of cases where we can come to understand why someone did something without in any sense mitigating the wrong or excusing them for what they did.

“There are lots of cases in which initially extreme wrongs seem very baffling to us and then often we find out why the person did it - in some cases because the perpetrators tell us exactly why they did it; this is the case for some serial killers or terrorists.

“It’s not the case, for me at least, when I hear the explanations, when they lay out their motives, I think ‘Oh, ok, it wasn’t that bad because I see what you’re trying to do’. Instead we see their motives and we are horrified not only by their actions but by their rationale for it.”

A slogan used by some opponents of gun control in the United States is “you can’t legislate against evil”. Is the word “evil” used today as a means of shutting down debate?

“Yes, it’s certainly true that some people use the judgement that ‘this is evil’ as a way of trying to end discussion and a way to try to block people trying to look for deeper explanations of what has happened. But I think they are misuses of the concept of evil.

“There are plenty of cases, including numerous examples of Holocaust survivors, who label what has occurred ‘evil’ and then go to great extents to try to understand why it happened and, with knowledge of those deeper causes, to try to prevent that kind of thing never happens again.

“In addition I think there’s a big difference in saying ‘this action performed was evil’ and ‘this person who performed it was evil’. A common phrase among philosophers who write about evil is: ‘Not every evildoer is an evil person’. There are people who have done evil things who are capable of moral reform and have come to be good people.

Are there many evil people in society?

“My definition of an evil person is not only someone who seeks that thing out - who is strongly disposed to it – but also someone we can’t fix.

“I do think there are some people who fall into that category; we get evidence from their patterns of wrongdoing. But I think we have got to be really cautious about saying someone is an evil person. There are lots of people who do extremely wrong things who should not be treated as a write-off.”

When someone annoys me how should I respond?

Hannah Arendt replies: “Trespassing is an everyday occurrence which is in the very nature of action’s constant establishment of new relationships within a web of relations, and it needs forgiving, dismissing in order to go on by constantly releasing men from what they have done unknowingly.”