Electric Picnic 2018: Highs and lows of the festival 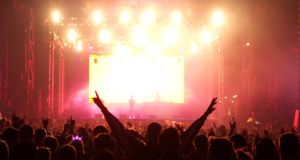 Versatile, at Electric Arena on Friday evening. Gigs don’t get any more explosive.

The crowd for Inhaler, at Other Voices on Saturday afternoon, all of whom were having a goo at Bono’s son Elijah.

Sigrid, who rocked up at the Other Voices Room an hour before her Electric Arena show. The queues!

Niamh Farrell of Hamsandwich, at Electric Arena on Saturday. Her vibrant-red pantsuit stole the day.

The Unelectables, at Salty Dog on Saturday. Nick Kelly leads a band of shiny-booted and smartly suited men of a certain age.

The bloke dressed as a ninja turtle who danced on stage with Hamsandwich.

The impromptu chicken-chopping-as-drumming musical performance by the chefs at the Kinara Pakistani Cuisine stand. And the food. Oh, the food!

People drinking cans and listening to tinny MP3 players in the campsites while, just a few metres away, some of the finest sound systems in the world were pumping out a feast of choice tunes.

Gomez, on Saturday afternoon. “Sing along to this next song if you know the words!” Cue silence.

Alison Spittle and Sharon Horgan, at Mindfield on Saturday. Taking turns to interview each other, the women provided personal insights that hovered between amusing and emotional.

Scariest installation of the weekend

The hooded figures gathered in a circle in the trees beside the Other Voices stage. It was like stumbling on a deleted scene from Stranger Things as you made your way to Salty Dog.

Fashion statement of the weekend

NBA basketball tops. Whatever happened to the once ubiquitous music-festival GAA jersey?

Darina Allen, showcasing chefswear at Theatre of Food on Sunday.

Mystery of the weekend

The tent with the Jonah Hill flag fluttering from its gazebo. What were they thinking? Actually, don’t answer that.

50 of the best podcasts to listen to right now
6 Welcome to Dublin, unless you're black
7

Mild-mannered he may be, but Matt Cooper will go 10 rounds with anyone
Real news has value SUBSCRIBE