Electric Picnic: The art that makes the festival magical

Horses in trees, a napping ogre, bubbles of colour and the wonderful Holomorph 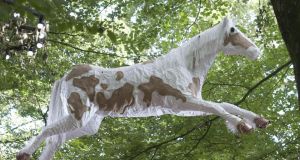 For the tired, the jaded, the cynical and the sensorially overloaded, Electric Picnic has the antidote for you. Which is fair enough, as it probably was also the cause of the afflictions in the first place. So turn your eyes from the brash branding as 3, Just Eat and AIB triangulate for your attention, and look up to see a bed hanging in the trees. There’s a chandelier, too, and a chair, alongside, incongruously enough, a silver sea horse. Though a bed resting on a branch among the leaves, about 10m up, is incongruous enough, come to think about it. It’s all courtesy of the Away with the Fairies arts collective.

Culture, as Brian Eno said, is anything you don’t have to do. That’s why it’s so vital. The art at Electric Picnic does a brilliant job of being unnecessary – in the sense that you can’t dance to it, or eat it – and one of the best spots to find it is along the path that leads from Salty Dog all the way to Rankin’s Wood. Here you’re treated to discoveries all the sweeter for being unexpected.

We wander into Ashling Smith’s Vision, mainly because it is late, we are tired, and there are two unoccupied beanbags in a small and welcoming hut. It is so worth it. Five pillars light up and you’re treated to scenes ranging from parklands and paths to stars whizzing by, as voices talk about what creativity means to them.

I only really warmed up to video art a few years ago, when a hangover took me to a darkened gallery for a little sit down. Hangovers can lower your filters, and my fragile state meant I had no plans to get up and go. I let the video wash over me, and became a convert. Now I’m prepared to give anything a bit of time. Anyway, Smith’s Vision is gorgeous, mellow and interesting with it. Plus the beanbags are a very clever festival touch.

Farther along you’ll find Sarah Goyvaerts’s massive Sleeping Giant, which is more of a napping ogre, and a great spot for selfies. Patsy Preston’s flying horse brings leaping equine beauty to the trees – and, judging from some of the scents wafting in the air, some festivalgoers may even be beguiled into believing it real. In another clearing Peter Slyman’s Peer Pressure is a little group of hoodied figures, clutching cans, slightly slumped. It’s poignant, disturbing, powerful and beautiful.

One of the things I like best about the art at the Picnic is how it sidesteps the usual systems that bring artists to prominence in Ireland, so you get new voices, fresh ideas and a great eclectic mix. Some of it’s just really pretty, like Emma Kate Butler’s Floating, which is lots of bubbles of colour, and Iryna and Inna Horkun’s enormous poppies. Some of it’s fun, such as Michelle Cain’s big willow foxes and badgers. Then there’s the wonderful: Augustine Leudar’s Holomorph is half-hidden in a clearing, so keep your eyes peeled for a little plinth, just down the way from ArtLot, and you’ll be rewarded with a truly magical moment.