Decades since they crawled out of Bristol’s DJ scene, theirs is still an extraordinary conceit 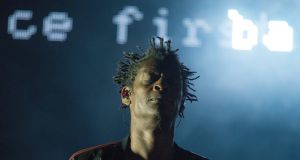 Main Stage
Massive Attack treated Picnickers to a preview of their headline performance when they interrupted breakfast with a rumbling, croissant-troubling soundcheck on Saturday morning.

Deep into the wee hours of Sunday morning, they’re back for a second serving of urban angst and songs that would prefer you danced in slow motion. And, as per their billing as electropop’s moody miracle workers, it is a breathtaking close to day two of Electric Picnic.

As stage lights flash and video screens beam ripped-from-the-front-pages references to Leo Varadkar and the new Rose of Tralee, Robert “3D” Del Naja and Grant “Daddy G” Marshall stand in the gloom. They are here to deliver a brooding updating of their gothic trip hop – one freighted with political commentary. (They are not, one gathers, Donald Trump fans.)

Decades since they crawled out of the Bristol DJ and graffiti scene, theirs is still an extraordinary conceit, a 4am anxiety attack reconstituted as arena-ready dance music.

As per their morning sneak listen, the set contains its share of oldies – as well it might, considering Massive Attack haven’t released an LP since 2010. One obvious gesture they resist is celebrating the 20th anniversary of Mezzanine, their finest album (cue controversial-opinion klaxon) and arguably the last time they truly commanded the pop-culture spotlight. They acknowledge the record with a claustrophobia-soaked Risingson.

But from there it’s off to pastures unexpected. They invite their brothers in arms Young Fathers on for a cameo, showcasing their dark, urgent take on hip hop. It’s a plucky gesture, as parachuting another band into your festival-headline set risks alienating the presumably significant chunk of your audience that has come for the hits.

Yet just as you fear Massive Attack have lost interest in being Massive Attack, they bow to convention with Safe from Harm and Unfinished Sympathy (both with vocals from Deborah Miller) whisking us back to the early 1990s and the trip-hop mother lode. It has been a meandering journey, but in the end Massive Attack get us to where we want to be.