Electric Picnic: By the end it was hard to imagine life outside

55,000 souls in a sealed world of sequins, snatched sleep and beer for breakfast 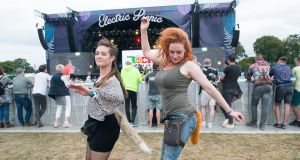 Ways of the Festival: Emer Moloney, from Thurles, and Tara Byrne, from Cork, at Electric Picnic on Sunday. Photograph: Dave Meehan

The world of Electric Picnic has become normal. Sunday morning is laid-back and dreamy, trying to woo us back after Saturday night’s oversights. The rain comes down mid-afternoon on Garbage – both the band and the discarded refuse – but we don’t really mind, because we have been fully inducted into the Ways of the Festival.

Breakfast is beer, sleep a snatched stupor, facial glitter mandatory. In our sealed world of sequins and beats it becomes hard to imagine life outside. Indeed, as we edge towards the final hours of the festival it’s easy to imagine that there is no outside world; that all that remains is us: 55,000 lost souls with a duty to found a new human colony.

It won’t be a painless transition: I’m reminded of the final scenes of Thor: Ragnarok, in which the tattered remnants of Asgard huddle together to take on an uncertain future. At Stradbally the epic queues for the ATMs, and the petition I signed to reduce plastic waste, will become redundant as the new society forms.

At first we cling to one another. Rumours of things to come slide into whispers of things past. Niamh from Hamsandwich doing karaoke with Róisín O, surprise gigs, and gigs of a lifetime. (Sigrid, Jungle and Le Galaxie, take a bow.) Bono’s son Eli gently rocking Other Voices with his band, Inhaler. We swap stories, give tips on where the best noodles are still to be found. This interlude cannot last.

It’s hard to know for sure how the civil war will have originated. It could be the Glampers v Tenters, Corporates v Litterwardens, wearers of small sequins lined up against those bedecked with large. Maybe the formerly gentle families who inhabit the daytime will rise up against the denizens of the campsites, who, each day, have washed over the landscape as darkness falls, like a boozy zombie apocalypse. Whatever happens, it will be ugly.

Indie trance bands will patrol the borders of Body & Soul. Trenchtown will secede, and put a stop to all immigration, as refugees from the barren wastelands of Rankin’s Wood seek solace at its peaceful beach and understated bars. We’re not without resources. By this stage my socks can be weaponised, and we’re not short of empty beer cans. We’re going to need them.

Those who have spent their days purveying unbelievably loud techno thump from every orifice of the festival will attempt a coup against the benevolent rule of the crew of the Salty Dog stage. For a while they will be successful, and some of the fairground rides will be repurposed as persuasion devices for dissenters. But supplies soon will run short, and a new hierarchy will emerge. Despite the fact that we had thought 55,000 was way too many, and that the organisers should really have capped it at fewer, we realise we’re in need of some key people.

The man with the anvil at the GreenCrafts Village will emerge a hero, as will the women who had peacefully been grinding oats at the Merry Mill. My Lovely Ranch takes on tending the remaining animals, and the Gangsta Granny knitters will be in charge of clothing once, as the nights draw in, the ensembles consisting mainly of underwear prove insufficient. The kids’ zone must be defended, to safeguard the future, until the first crop of Electric babies are born, their names – George, Nile, Sigrid, and Cigarettes after Sex – giving clues about who inspired their conception.

Eventually, we allow Theatre of Food, and the chefs from Kinara, to take over from the lads who want to fry everything that moves, and the colony ends up extraordinarily well fed. We’re also brilliantly entertained. Maybe this new society can work. Maybe there is hope. Outside, Trump, like winter, is coming.

Pizza Girl: A sharp shock of a novel
7