Dublin Fringe Festival: What should I see this year?

The 2018 event includes productions on shame, fatherhood and an Aer Lingus hijacking 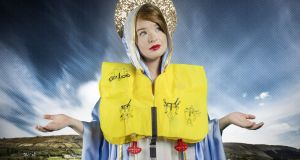 Janet Moran in 'A Holy Show'

It’s here, starting tonight, in venues (and on the streets and on a bus and wherever you’re having yourself) across Dublin. The enormous, varied, challenging, surprising, overwhelming Dublin Fringe Festival is bulldozing into town. Take a deep breath and dive in: 23 venues, 16 days, 80 productions, 55 world premieres.

But how to navigate this behemoth? Who knows what will thrill or what will disappoint? Let’s stick our hands in the lucky dip and see what comes out, in no particular order:

– The Fattest Dancer at St Bernadette by Thommas Kane Byrne sounds a hoot – at the annual showcase at Julian La Blanc’s School of Dance and Drama, Julian divulges how he should have been a star. A bunch of well-known actors – including Janet Moran, Kate Stanley Brennan, Margaret McAuliffe, Hilda Fay, Sarah Morris – do cameos as the mother of the stage school kids.

– Shame: Individually they are impressive artists, but when they join forces professionally as well as personally, we want to see what singer/songwriter Seán Millar and actor/film-maker Pom Boyd come up with in Shame. Their new theatre show ritualises episodes from Boyd’s youth, exposing her deep toxic shame, and tries with the audience to achieve catharsis and let it go. Millar’s theatre style is post-dramatic, testimony-led, with lots of songs and music. They’re calling it sacred punk, with music influenced by 1970s bands.

– Cock Cock, Who’s There? just won a Total Theatre Award in Edinburgh and has a short, highly-anticipated run: young documentary-maker Samira Elagoz reconstructs the raw aftermath of a sexual assault in a performance about violence and intimacy.

– Some other shows that come highly recommended via Edinburgh include The Cat’s Mother, a dark comedy asking how far you’re willing to go for your family; Dreamgun, with skewed, joke-stuffed and wholly unrehearsed takes on established cinematic favourites; Drip Feed, Karen Cogan’s fast dark comedy about the messiness of being youngish, female and queer in Ireland (shortlisted for Soho Theatre’s biennial Verity Bargate Award), and Vivarium, Don McCamphill’s savage play exploring life at 13 on a Northern Irish council estate.

– Catch some “street-art opera” in Drive-By Shooting, a comic story of passion and revenge played by octogenarians on zimmer frames – on Moore Street at 12-minute intervals.

-– Janet Moran’s A Holy Show, a new comedy about the 1981 hijacking of an Aer Lingus plane by an ex-Trappist monk with a bottle of water as his weapon.

– Some others to keep an eye open for include: Seahorse, a new show by Christiane O’Mahony about trying to be a grown-up; For Saoirse, poet Colm Keegan’s debut play about fatherhood and a young man growing up in a city falling down around him; Philip Connaughton’s dance Assisted Solo, looking at his relationship with his mother who suffers from dementia; Stop/Over, where a young Irish couple reunite for 24 hours in New York, from café to club to gallery – and featuring a bunch of guest musicians and artists. It is also worth considering all the Show-in-a-Bag productions at Bewley’s (Brendan Galileo For Europe, Appropriate, Split Ends and Ireland’s Call).fringefest.com