Patrick McCabe: On My Culture Radar

The writer on why Twin Peaks: The Return is ‘the greatest artwork of the 21st century’ 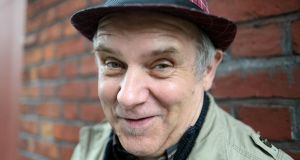 I’m reading Required Writing by Philip Larkin. He’s an extraordinary figure. I think he’s one of the greatest poets that ever lived, so I’m very keen on him. He’s also controversial, I don’t understand why. He wrote a lot about jazz, art, Englishness and he’s also written a lot about Ireland. I’ve always got five or six books on the go, which might be a comic book, a diary of an Edwardian lady or a thriller. I read during my writing periods, too: it keeps the muscle flexible.

There’s too much eating going on, so I’m going to use this as a small protest. It’s not an anti-metropolitan thing at all, because I love food, but I do think there’s too much talk about it. People have a vocabulary that I don’t have. I tend to eat in ordinary places; in effect they’re so rare now that they’re the exotic ones. I like to go out to eat big mixed grills, in places like country hotels where people don’t really talk about it, they just finish the plate before an elegant waiter or waitress would have the chance to read the evening specials to them.

Stewart Lee is my all-time favourite comedian. He’s raised it to the level of art now. He’s his own creature, and I could watch him for hours. Any stand-up I’ve seen of his is really compelling.

Dermot Healy was an old friend of mine, and there was a group called The Hacklers recently toured On Broken Wings. It wasn’t a smash hit or anything, but I thought that was very true to Dermot’s vision of it. It’s the story of a west of Ireland, bachelor kind of guy, who lived an ordinary life but had a fantastic imagination. It’s very much in the tradition of Commedia dell’arte, Buster Keaton, Beckett, Kafka, all mixed up in the west of Ireland.

I love Charlie Cullen, who illustrated Ulysses. He’s the artist’s artist. If you ask any artist in Ireland of a certain generation who the finest draughtsman is, they’ll tell you it’s Charlie. He just had an exhibition at the Galway Arts Festival, which was a great success. It’s very funny and carries a great historical weight, but it’s timeless. He’s a very powerful artist.

I’ve been listening to a lot of young traditional players – there’s a new generation coming through. These kids, although they’re probably in their 30s, will be the grandkids of Planxty, and they’re not just treading water – they’re coming up with their own take. The most recent one I found was Lankum’s Between the Earth and Sky. I’m also very fond of Lisa O’Neill, and Pat Quinn, who I just saw in the Aran Islands. He’s in the tradition of Ramblin’ Jack Elliott with a Gaelic twist. Christy Moore has recorded one of his songs called Lingo Politico.

I suspect TG4 has a lot to do with the new energy, as the vibrancy of the language has migrated to the instruments, and the kids are full of that unstoppable ambition you have at that age. It’s very invigorating, I have to say.

I’m very fond of Montreal. It’s a very cultured place, and very easy-going. It’s a beautiful place to be, and unique. I’d go to the museums and I do like the food there. The people are probably a bit looser than in Toronto; I found them to be fond of good things in life, which I am myself.

My favourite actress was Brenda Vaccaro but no one would remember her now. She was in Midnight Cowboy. I like looking at her. There’s a difference between an actor and a star, and she’s a star. And I love Stephen Rea an awful lot, mainly because even if his part is tiny, you never forget him in it. He does an awful lot with very little.

It’s not out yet, but I really enjoyed Black 47, directed by Lance Daly. Taking on the Irish Famine is probably one of the most difficult things anyone can do, for obvious reasons, but he treats it like a spaghetti western, with a big gun-down. Stephen Rea is only in that for a short time and he sings Little Jimmy Murphy. It will blow your mind. It’s really terrific.

The best TV show I’ve seen is Twin Peaks: The Return. It’s a masterpiece; it’s probably the greatest artwork of the 21st century. It’s this timelessness thing that David Lynch has; you don’t know what dimension you’re in. And his synthesis of music and images … Sine qua non, as they say, there is nobody like David Lynch when it comes to tapping the unconscious with subliminal musical fuges. With a lot of shows, you can see six people competing for the survival of their idea. But with David Lynch, you’re into the Hitchcock land, you’re into the subconscious, and there’s something better about that. The craft isn’t obvious.