Galway 2020: After the fighting comes a leap in imagination

The European Capital of Culture creative director avoided confirming how much of €39.7m budget has been raised privately 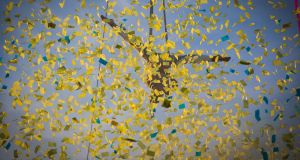 Members of the French performance company Gratte Ciel in Eyre Square, Galway during their spectacular live performance alongside Galway musician and performer, Anna Mullarkey at the launch of the Galway 2020 European Capital of Culture programme. Photograph: Aengus McMahon

The final, imaginative, programme for Galway 2020, announced on Wednesday, was a long time coming, since the city and county won the bid in 2016 to become Ireland’s Capital of Culture for 2020.

In the meantime there has been blood, sweat and a lot of tears, with resignations and funding difficulties, but also a lot of work by the team of about 30 people led latterly by CEO Patricia Philbin and head of programme Marilyn Gaughan Reddan.

The square programme document (with an image of a sheep on the cover) has an impressive and enormous range of events, spread half and half between city and county, and a mix of big showy projects such as the 10-day cello festival Cellissimo or Borderline (creating a temporary building allowing memories to be registered, after which the building will be burned), and smaller more intimate events. About 75 per cent of the events will be free and there are year-long opportunities to volunteer and be involved in creation.

The budget for Galway 2020 has been contentious. The original budget in the bid book that won the designation was almost €46 million, with some €6.75 million to be raised from private sources. The budget was later revised to €39.7 million - an almost 14 per cent drop. Creative director Helen Marriage said that is still the budget. She avoided confirming how much had been raised privately, saying sponsorship was continually being raised, and hinting at a specific large contract in the offing. She said she expects the final sponsorship tally to come in at the target €6.75 million, but there have been suggestions of fudging at the edges, to include some sponsorship-in-kind within that.

There will be some comment about which elements of the bid book which won the designation have made it into the final line-up, and there’s an element of it’s-the-way-you-tell-’em about how it is presented. Marriage said “almost everything that was in the bid book is in here” gesturing to the programme.

One example of how elements evolved is Hy Brasil, which was initially mooted as a large project involving Galway children imagining the mythical island off the west coast, and which has become, in the final programme, a children’s book about Hy Brasil by Trish Forde, which every child starting school in Galway 2020 will receive.

Marriage feels the programme is integreated thematically around the City of Culture’s three strands of language, landscape and migration, saying there is no difference between the bid book and the programme in terms of values and articulation of identity.

But then, the bid book, as chairman Arthur Lappin said in his speech, was “a declaration of intent, to shake up our perceptions and excite our imaginations.

“I believe that this programme will be a catalyst to help us reflect on: how we see ourselves; how we relate to our neighbours – near and far; how we embrace our native culture and assimilate the cultures of those who have come to live here; and how we relate to our environment.”