Patrick Freyne: ‘I was on Dragon’s Den twice, once with a fake moustache’ 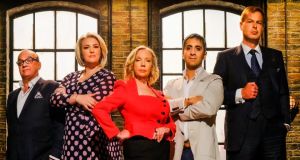 Good news everybody! I have found some investors interested in that kooky business idea you have – insert whatever frippery you want here: a social network for cats/carbonated milk (yum)/a poover (a hoover for poo)/a gimmicky “paper website” called The Irish Times. All you have to do is follow me down the docks to this old badly lit warehouse and solve the riddles of five scowling cranks who have a big pile of cash money.

Oh, you have some questions.

“If these investors are so rich, why do we have to meet them in a spooky old warehouse?”

“Why does the rightmost investor, Peter Jones, look like a very tall, old schoolboy?”

“Why don’t they keep their money in a bank rather than in piles by the arms of their chairs like tax-avoiding bachelor farmers from the midlands?”

“Why is the guy who was on Newsnight here providing alliterative commentary? Doesn’t he have a lot on his plate right now with the apocalypse and everything?”

“Is that a sleeping bag stashed behind Deborah Meaden’s chair? Do they live in this spooky old warehouse?”

“Will sterling even be a viable currency come October 31st? Might it not be better for them to just stockpile cigarettes and nylons?”

These are pretty good questions, and it’s surprising that it has taken until now, the BBC’s 17th series of Dragons’ Den, for me to consider them. In fairness, a lot has happened in the past few years. When Dragons’ Den first aired on the BBC, the world was a different place. Tony Blair was still in power. Crazy Frog was still in the charts (he’s now in power). And “entrepreneur” was still an aspirational designation and not a euphemism for “I was recently made redundant”.

It was still possible, back then, to believe in the myth of the plucky visionary with a dream. But the dark days came and we put all our money into defunct banks and cryptocurrencies and then multinational tech monopolies ate our dreams and robots took our jobs and Spider-Man got rebooted for a third time and then Paw Patrol happened and they gave all the emergency services to dogs.

Of course, the Irish iteration of Dragons’ Den eroded into nothing when some former dragons decided to get into the empty-demagoguery business and ran for president. By then every vaguely entrepreneurial person in Ireland had been on the programme (I was on it twice, once with a fake moustache and using the name Pierre), and business in Ireland was pretty much over. It was only a matter of time before the last Irish person walked out of the IFSC, turned the lights out, and took the Civil Service exams.

The British iteration hung in there, of course, because the only thing they know how to quit is stable trading partnerships with their European neighbours. So now their version of Dragons’ Den is back for another series before the post-Brexit version, when the pitches will change tone somewhat, from “Here’s a quirky way to wash celery” to “I have access to clean water that I will trade for your antibiotics” to “Give me those canned goods and I won’t hit you with this brick” to “Well, Deborah, chew.ie is a social-networking site for lonely cannibals”.

For now, things are still soundtracked by questioning synths and not the sound of distant drums and keening. The only original dragons left are the aforementioned Deborah, who remembers when only one woman was allowed on television at any one time, and Peter, the freakishly tall boy. They frown more than the others, for they have more practice. Scowling contemplatively while tapping on your money pile in a draughty warehouse is still the main trait you need to be an investment guru. The new dragon Sara Davies has much to learn. Recently hatched, with dragon shell in her hair, she spends some of the time beaming encouragingly. She clearly still gets a buzz from the possibility she’ll get to tell someone who has quit his job and drained his bank account and ruined his marriage that his app idea is shit.

And so, this week, there are two friends who have created a bronzer that also acts as sunscreen, the magic of which leads to an unholy investment alliance of Sara and the retail magnate Touker Suleyman. Meaden thinks it smells weird. (They are in an old warehouse.) There’s a man who has developed a toilet brush that avoids dripping “toilet juices” (his coinage and his true legacy) because it is stored inside the toilet, where, he insists, it will remain clean. There’s an ex-publican who pitches his Cloven Hoof spiced rum after a performance by a heavy-metal band, which is the only way to pitch a spiced rum, really. There’s a charming Irishman in a cowboy hat who’s trying to sell “Irish black butter” to the Brits, which, being from “Ireland”, I’m pretty sure isn’t really a thing, but say nothing. His “blarney” is referenced by Evan Davis in the voiceover because, well, you know what they’re like. And there are a couple and their small fluffy dog who pitch health food for pets (post-Brexit this will be a staple for health-conscious humans), when, going by the look on pet-loving Deborah Meaden’s face, they should have just said, “Give us a million quid, Meaden, and we’ll let you pet our dog.”

The dragons bicker and dragonsplain and undercut one another and give people business-studies exam questions and generally toy with their hopeful supplicants like dark gods. The camera cuts away just before Touker Suleyman cries “Money fight” and they begin tossing fistfuls of soon-to-be worthless sterling around the warehouse. Okay, I don’t know this for sure, but I’m guessing this happens every time the credits roll. (I used to do it myself, but it hurts when you have to use metal money.)

If you’re tired of money fights and people pretending that “business” is a real thing, try Aisling Bea’s new comedy, This Way Up, all six episodes of which are on All 4. It’s about a pathologically wisecracking, emotionally raw English-language teacher (Bea) slowly recovering from a breakdown with the help of her older, apparently wiser sister (Sharon Horgan). A lot of writers are mining existential sadness in comedy shows at the moment – it’s there in BoJack Horseman and in Russian Doll – but this is as warm, empathic and kind a picture of human fragility as you’ll find, and it manages to do it all while being very, very funny.