Oscars race: who are the real contenders and who have blown their chances?

Academy Awards 2020: An educated stab at the 2020 best-film nominees, six months out 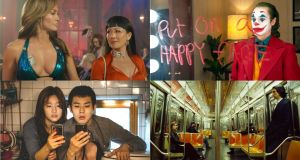 Lay out the sandbags. Check the gas masks. Plant potatoes in the allotment. The annual phoney war that kicks off awards season has properly begun.

A few of the contenders screened at Cannes back in May. But the lines of battle became clearer still with the recent, overlapping Venice, Telluride and Toronto film festivals. We are now capable, should anybody care, of making an educated stab at the potential Oscar nominees.

Shaping up for the best-picture prize at the 2020 Academy Awards, on February 9th next year, Quentin Tarantino’s Once Upon a Time in... Hollywood, which debuted at Cannes, had made enough money to stay firmly in the race. The rapturous reception for Bong Joon-ho’s Parasite, another Cannes baby, at Toronto – third in the People’s Choice vote – suggest that it could become the first Palme d’Or winner to secure a best-picture nod since Amour back in 2012.

Taika Waititi’s Jojo Rabbit, which inserts a comic version of Adolf Hitler into its satire of the Third Reich, will need to feed on that controversy to make it to the big race

Lulu Wang’s touching comedy The Farewell has delivered on the potential of its Sundance premiere and looks set to compete against those films.

Terrence Malick’s glacial A Hidden Life, the story of an Austrian conscientious objector in the second World War, got a similar response in Toronto to its qualified hurrahs in Cannes: those who love it really, really love it; many remain bored.

On to the autumn premieres. Todd Phillips’s Joker didn’t sound like a best-picture contender until it won the Golden Lion at Venice. Now it has to be considered a serious runner. Joaquin Phoenix, who plays the colourful villain, is already an unattractive 4/5 favourite for best actor with bookmakers. He has been nominated four times, so the “overdue” factor can’t be ruled out.

Noah Baumbach’s Marriage Story, which played at Venice, Telluride and Toronto, always sounded like a more traditional Oscar contender – Adam Driver and Scarlett Johansson play bohemians falling out of love – and was so warmly received at all three events that it seems sure to score in multiple categories. Both actors are currently second favourites for their lead races.

The Grolsch People’s Choice Award at Toronto kicked up a bit of a quandary. Only once in 12 years has the winner failed to score an Oscar nomination. Theretofore an outsider, Green Book began its run to this year’s best picture by securing the People’s Choice in 2018.

This writer was among those cheering when Taika Waititi’s Jojo Rabbit premiered at the Princess of Wales Theatre last week, but the critics were ultimately divided on a film that inserts a comic version of Adolf Hitler into its satire of the Third Reich. It will need to feed on that controversy to make it to the big race.

Two Toronto premieres looked like sure-fire Oscar contenders when the programme was announced. After stinky reviews and an appalling opening at the US box office, John Crowley’s The Goldfinch can forget it.

But Marielle Heller’s A Beautiful Day in the Neighbourhood turned out to be more interesting and peculiar than synopses suggested. Tom Hanks is terrific as the US children’s entertainer Fred “Mr” Rogers. Matthew Rhys is equally strong as the journalist whose life turns around under the older man’s influence. Unless the studio tries category fraud and runs Hanks for best actor, he should be inked in for a best-supporting nod.

James Mangold’s Le Mans 66 (titled Ford V Ferrari in the United States), which premiered successfully at Telluride before moving to Toronto, feels like the sort of film that will mop up nominations without winning anything. Matt Damon and Christian Bale play, respectively, the designer and the driver who helped Ford compete at the 24 Hours of Le Mans in 1966. It’s an old-school slice of precision engineering (sorry) that will appeal to petrolheads of all ages.

Joining Marriage Story in the Netflix camp was Fernando Meirelles’s The Two Popes. Almost everyone at Toronto and Telluride loved this study of the relationship between Pope Benedict XVI and Pope Francis, but it might be a little sedate and talky to last the distance against the big-hitting best-picture contenders that are yet to debut (see below).

Anthony Hopkins (Benedict) and Jonathan Pryce (Francis) will surely compete for acting prizes. They are dual leads, but Oscar pundits reckon Pryce will be pitched for best actor and Hopkins for best supporting actor. Both Welshmen could make it in.

Rupert Goold’s Judy, a story from the later years of Judy Garland, received only middling reviews in Telluride and Toronto, but Renée Zellweger was cheered to the rafters at the latter and looks to have a good chance of becoming the latest woman to win the top acting price for a middling film. (Remember Meryl Streep in The Iron Lady and Julianne Moore in Still Alice.) The bookmakers have her favourite at 2/1.

Lorene Scafaria’s Hustlers was a real surprise at Toronto. The heist movie was expected to be a crowd-pleaser, but it also delighted the critics and propelled Jennifer Lopez toward a hitherto unexpected potential best-actress nomination. Who’d begrudge her?

A few more strong contenders have yet to premiere. Three in particular look like likely players. Martin Scorsese’s The Irishman casts Joe Pesci, Robert De Niro and Al Pacino in a postwar gangster chronicle. Sam Mendes’s 1917 is a tale of the first World War. Greta Gerwig’s Little Women revisits the Louisa May Alcott yarn in the company of Saoirse Ronan, Emma Watson and Florence Pugh. Now everyone takes to the trenches until the precursor awards kick off in December.

Here’s where we think the best-picture Oscar race stands. Up to 10 films can be nominated.

LIKELY NOMINEES
Once Upon a Time in... Hollywood
Marriage Story
The Farewell
Joker
Parasite
A Beautiful Day in the Neighbourhood