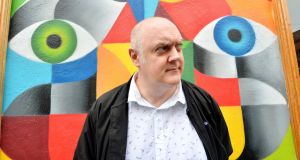 ‘Hang on, am I adopted?’ Dara Ó Briain has spoken publicly for the first time about his adoption. Photograph: Alan Betson / The Irish Times

Dara Ó Briain was told at an early age that he had been adopted. The comedian, broadcaster and author said he had a happy childhood growing up in Bray, and a “fantastic relationship” with his parents.

He spoke publicly for the first time about his adoption on Wednesday night, in an interview with Irish Times political editor (and his old friend from UCD) Pat Leahy, as part of the Irish Times Winter Nights Festival.

“I come from an unbelievably content family background,” said Ó Briain said. “Being adopted [for me] is a state of knowing you’re adopted, then it not being mentioned for ages. And then at a point in later life going, ‘hang on, am I adopted?’

“I remember my father coming to London for lunch, and we had one of those conversations where you just clear the decks on everything. I told him, ‘I seem to remember knowing this’, and he said, ‘yeah, but it’s not a secret. I quit telling you because, you know, why would you keep saying it?’

“They were very supportive ... It gets mentioned, but why would you bring it up all the time?”

It was the film Philomena, in which Irishwoman Philomena Lee embarks on a quest to find her adopted son, that prompted Ó Briain – who now lives and works in London – to start his own search.

“Maybe [my birth mother] might want to know how it turned out. And maybe it’s our responsibility to go, ‘that worked out … I did end up in a stable home, and you should be grand about that.”

Ó Briain decided in recent years to search for his birth mother; a process that he describes as largely “positive, positive, positive”. However, many adoptees are currently unable to access birth certificates listing their birth parents’ names, due to legal obstacles, including a constitutional right to privacy on the part of the parents.

“The search is unnecessarily hard,” Ó Briain concedes. “Start-of-life documentation, which concerns their lives – adopted people do not have the right yet to automatically get that.

The bureaucracy was an impediment. “[Authorities] are bound by the fact that they have the information that you don’t have about you. And so you send them a request for the information, but there’s also a register you go onto. The idea was set up a register so that those seeking and on either side could possibly find each other. I have never heard of that working.”

During the interview, Ó Briain lifted up various pages of his adoption file to camera, many of which simply had the word “redacted” on them.

“They give you a sheet of information, and it has biographical detail of your father, and it’s invented. It has no bearing on reality at all.”

Eventually, Ó Briain sourced his own birth certificate. “I remember getting this birth cert and folding it and thinking, I do not want to open it. I wanted to find a quiet moment to open this document. I remember finding it and reading it for the first time. It’s an elemental piece of paper. It’s a huge document to get in your hand.

“I wasn’t crying or anything like that, but it was still ... that this other person is me.”

Ó Briain has since met his birth mother, as well as various biological siblings. Owing to Covid-19 travel restrictions, he has yet to meet the entire family.

“I talked to my birth mother about it today, and I said, ‘look, did you want this?’ and she said, ‘there was no choice in this’. The whole thing was built on shame and expediency and a feeling of, just get this done.”

The Irish Times Winter Nights festival – supported by Peugeot – is a series of online talks taking place each evening this week.

For tickets and more details see irishtimes.com/winternights. A single price of €50 admits ticket holders to all events at the festival. Irish Times digital subscribers can purchase tickets at the discounted price of €25 – just make sure you are signed in and follow the link below. The discount will be automatically applied.