‘People were seeking justifications for why George had deserved to die ... It was triggering’ 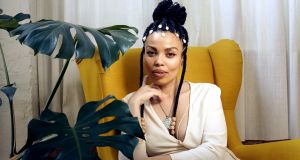 Circumstances surrounding the killing of George Nkencho were “unconscionable and horrific” author Emma Dabiri said in an interview for the Irish Times Winter Nights Festival.

“The circumstances of what happened are unconscionable and horrific,” said Dabiri – an Irish writer, academic and broadcaster whose father is Nigerian and mother Irish.

Nkencho, 27, was shot dead outside his home by the Garda Armed Support Unit in Clonee on December 30th after assaulting a shopkeeper and threatening gardaí with a knife.

“How many people are shot and killed by the gardaí? It’s not something that is a common occurrence at all,” Dabiri continued, in a conversation with the Irish Times “New To The Parish” columnist Sorcha Pollak about racism, Ireland and the struggle for justice.

“The whole circumstances of the event itself are shocking and to me very worrying, actually, about the direction that Ireland could go in. This cannot be something that becomes commonplace or becomes normalised in any way.”

Dabiri, who is based in the UK, published her first book, Don’t Touch My Hair in 2019. It explores “why black hair matters and how it can be viewed as a blueprint for decolonisation”. Her second book, What White People Can Do Next: From Allyship to Coalition, is published in April.

She was talking as part of the Irish Times Winter Nights festival, a series of online talks and events taking place from January 25th to 29th. The festival is supported by Peugeot. Still to come are guests including Scotland’s first minister Nicola Sturgeon, Taoiseach Micheál Martin, Prof Luke O’Neill of TCD, actor Gabriel Byrne and CNN news anchor John King.

It was “triggering” to read social media reactions around the death of George Nkencho, Dabiri continued. “The attempts to normalise it, the many, many people who were seeking justifications, excuses, for why George had actually deserved to die, to me, was triggering in that it really brought me back to the Ireland that I grew up in.

“The response to the shooting of George was just that kind of virulent, anti-black, violently racist … response that I had been heartened that I hadn’t seen to that extent previously [in Ireland]. Gauging on what I’d seen previously, I was, like god, maybe there is a change in Irish attitudes to the positive. The reaction, the backlash, against what happened with that shooting shows me that those virulently racist tropes and ideas are still very, very present and very, very potent.”

She continued that it was “very saddening and worrying to see that level of animosity and backlash. It demonstrates we really can’t rest on our laurels and be thinking, ‘oh yeah, it’s grand in Ireland. There’s not an issue with race’. The discourse I saw around George was absolutely disgusting. I had to come off line for a bit.”

Racists and far-right activists hijacked the death to spread their agenda, she says. “There are a lot of bad faith actors really invested in identifying these moments as destabilising points to ramp up what we would call the culture wars. The way these events are manipulated and used by bad faith actors is… something we have to be very aware of when talking about how we do anti-racism.”

Dabiri also said the Irish media needed to work harder at diversity. “Are there any columnists that aren’t white in Ireland?” she said. “Is it just occasionally having black voices writing opinion pieces? As opposed to columnists who are full-time staff members? Why hasn’t it happened? There are lots of black and brown Irish people and there don’t seem to be many opportunities for them to be present in these spaces. That has to be happening at a more institutionalised level.”

Dabiri lived in Atlanta, Georgia until she was five and then moved to Dublin with her mother. The were few black Irish people in Ireland at the time, and she experienced both racism and a sense of isolationism growing up. Being black and Irish in the Nineties was tantamount to “unicorn status” she said.

But she considered herself Irish first and foremost, she continued. “I’m just Irish, end of story. “I identify as a black Irish person. And I identify strongly with the fact my dad is Nigerian and Yoruba …. My critiques of Ireland come from a place of love. And my knowledge [of] the potential Ireland has dealing with race and racism. In a way maybe I hold Ireland to a higher standard than other places.”

She added that seeing young black Irish people leading the Black Lives Matters protests here over the summer filled her with hope.

“It was around the time I left that there started to be migration into Ireland. To see a Black Lives Matter protest that was being led by black people was kind of mind-blowing. It made me feel emotional. If this was the Ireland I was growing up in, I wouldn’t have left. I left primarily because of the crushing isolationism. To see this community and see it being led by young black people was incredibly powerful. It makes me feel a lot more confident that Ireland is a place where my children could grow up.”

For tickets to the remaining events in the Winter Nights festival, seeirishtimes.com/winternights. A single ticket costing €50 admits ticket holders to all events at the festival. Irish Times digital subscribers can purchase tickets at the discounted price of €25. Just make sure you are signed in, and the discount will be applied automatically.