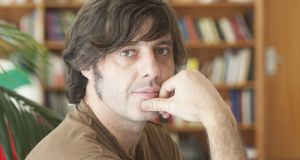 This particular August, far-flung journeys might seem a distant memory for many, but with the fiction in translation scene as vibrant as ever, the world, just for a moment, seems infinitely plural once again.

Andrés Barba’s fascination with the complex interior worlds of children was explored to chilling effect in his novella Such Small Hands (2017) an orphanage-set ghost story. His new novel, The Luminous Republic (Granta, £12.99, 208pp), also translated from Spanish by Lisa Dillman, is set in Argentina, in the town of San Cristobal.

The narrator, a local government official, joins a task force hastily created to hunt down a group of mysterious children whose origin is a mystery and who, inexorably, begin to cause violent havoc for the town’s inhabitants. It is April 1993, and the narrator, (who tells the story in retrospect, partly in fear and wonderment and partly in the manner of filing a report) and his family are newly arrived in San Cristobal.

The scavenging children who begin to appear in small groups around the town “speak in a incomprehensible language” – “unlike so called normal kids they were not rightful heirs, they had to steal”. Barba stokes up a tension as thick as the jungle encroaching on the town’s edges, as the children grow more bold and the townspeople more desperate, especially when their own offspring start to disappear. The question of who are the hunters and who the hunted becomes interchangeable, as Barba, in a disquieting work lying somewhere between allegory and fable, explores the pitiless nature of conquest and belonging.

“You can’t choose what kind of happy you’re going to be, only the kind of unhappy, and that’s good enough,” explains a character in Circe, one of 14 stories comprising Many People Die Like You, Swedish writer Lina Wolff’s first short fiction collection, translated by Saskia Vogel (And Other Stories, £10, 208 pp).

Displaying the same enjoyable exhibitionism as her novels Bret Easton Ellis and the Other Dogs and The Polyglot Lovers, Wolff revels in turning the tables on expectation and convention. In both No Man’s Land and the book’s title story, two men, each initially believing it is they who control a volatile situation with a woman, experience a deadly reversal; the hero of the eponymous Maurice Echegaray, a charismatic yet dodgy entrepreneur in Madrid, has his rise and bitter fall witnessed through the eyes of the disingenuous young woman who comes to work for him.

Wolff, in common with the American writer Deborah Eisenberg, starts each story without preamble, ostensibly casual, but always with authority, such as “This happened when we were living off the southbound highway” ; and “It began in May”. The poignant , ethereal Odette Klockare, in which an elderly woman, a stranger in a gossip-ridden small Swedish village, takes piano lessons and more from a much younger man, begins summarily: “When the removal van drove into the village that spring, Malcolm was still one of us.” The final tale of this bravura collection, Year of the Pig, is one of imminent apocalypse, partying, faith healing and mutation, in which “the black market is a brave new world” – oddly prescient for these challenging times.

Luis Sagasti’s A Musical Offering (Charco Press, £8.99, 100pp) is richly ambitious fare from the Argentinian author, whose first novel to be published in English was Fireflies. Translated by Fionn Petch, Sagasti turns Scheherazade in order to map a circular and fabular route, returning again and again to Bach’s Goldberg Variations – the composer’s 1741 composition for harpsichord with aria and 30 variations – as the book’s centre. As much a meditation of the role in which music plays in our lives – from Brahms’s Lullaby to the music which accompanied the 1977 Voyager space mission – to its many interpreters, Sagasti takes in, variously, Glenn Gould, John Cage, the canvases of Rothko and the Navajo sand paintings which influenced Jackson Pollock. “Where does a story end? Taking a classical view point is it when the knot has finally been untied?” queries Sagasti, in a beautiful, fragmentary rendition which never strikes a false note.

Mexico’s Guadalupe Nettal’s disturbing fiction is wonderfully suited to the short story form. Bezoar and Other Unsettling Stories, translated by Suzanne Jill Levine (Seven Stories Press UK, £9.99, 96pp), features, among other marvels, Bonsai, in which an otherwise unremarkable Japanese couple’s marriage begins to break down when the man develops an interest in botany and begins to obsess that his bewildered wife is really a plant, and one with which he, also in plant form, is not compatible.

The Other Side of the Dock is a coming-of-age narrative: a lonely and bored 15-year-old girl, intent on perfecting true solitude over the course of an island summer holiday, instead finds herself reluctantly engaging in a brief, at first “aggressively friendly” and later unexpectedly tender interaction with another, more glamorous teenage girl, who undergoes a sudden bereavement. All the heat, self-hatred and nonchalance of adolescence is captured in a few brief pages.

The son of a photographer, who specialises in “before and after” photographs of patients about to undergo eyelid surgery, becomes infatuated with a woman patient who is due to be operated on in Ptosis. It is exclusively her minor imperfection that arouses in him a “maddening sensuality”, “dreamy and obscene” – an apt description of Nettal’s languid writing as a whole.

An exquisitely written and continuously fascinating hybrid work of fiction and history from Dutch-born Chilean author Benjamín Labatut, is his first book to be translated into English, by Adrian Nathan West. When We Cease to Understand The World (Pushkin Press, £14.99, 192pp) has already been feted by Philip Pullman and Geoff Dyer, among others. Exploring the link between genius and insanity, science and ethics, Labatut takes us, with a huge imaginative flair and empathy reminiscent of Stefan Zweig, into the back stories of the great (male, naturally) mathematicians and physicists of the 20th century, from the quantum mechanics of rivals Erwin Schrödinger and Werner Heisenberg to Fritz Haber, a Nobel chemist and assimilated Jew, who found a way to develop the chlorine gas which was so deadly a weapon on the Western Front, to the Zyklon B which would later, unbeknown to Haber who died in 1934, kill millions, including some of his own relatives, in the gas chambers of the Nazi concentration camps.

Montenegro set and translated from Croatian by Paula Gordon & Ellen Elias-Bursac, Olja Knezevic’s captivating Catherine the Great and the Small (Istros Books, £10.99, 220pp) is as much about the history of former Yugoslavia from the 1970s onward as it is the story of one person – Catherine, or Katerina, whose mother dies of a swift and lethal cancer when Katerina is a teenager in the summer of 1978, scented forever with the memory of heat and dust and oleanders.

“Grown-ups tell us we are the lucky generation, we should be disgusted by revenge and butchery, we should break the cycle,” Katerina comments, unaware of the chaotic and bloody years to come for the Balkans. In the meantime, Katerina is shuttled between her philosopher lecturer father and maternal grandmother, and in awe of her of contemporary Milica, who longs to escape to the big city – and even to the West – and become an actor. Charged and highly perceptive, Knezevic successfully juggles memorable characters against the novel’s ever-changing backdrop.