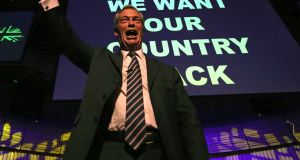 Nigel Farage: his Brexit Party in the UK is a populist movement built around a strong leader which uses the organisational techniques of the internet. Photograph: Getty Images

Money and political power are inextricably bound together. Political success is far more attainable with financial backing than without, and the history of politics is littered with examples of venality, cronyism, influence-peddling and corruption.

From rotten boroughs to paid-for peerages, the political history of the United Kingdom is no different despite efforts over the years to bring some transparency, accountability and spending limits to the process.

The past five years have shown that British politics is particularly vulnerable to manipulation by vested interests and well-financed fringe groups, says Peter Geoghegan, the UK-based, Longford-born journalist who leads the investigations unit at the award-winning Open Democracy news website.

Geoghegan’s new book, Democracy for Sale: Dark Money and Dirty Politics, looks at covert financing and shady dealings during the Brexit referendum and in the general elections of 2017 and 2019, drawing some worrying conclusions: the UK’s electoral regulations are weak and the penalties for wrongdoers risibly low; influential think tanks peddle the paid-for interests of anonymous donors; social media makes disinformation and malpractice easier than ever to do and harder than ever to track.

“It feels quite apt to be talking to The Irish Times about this,” says Geoghegan. “Because actually it was while working for your august institution that I really stumbled across the story that started me on this journey basically four years ago.”

It was while reporting on the referendum campaign in 2016 in staunchly Brexit-supporting Sunderland that Geoghegan came across a full-page newspaper ad on the front of a discarded newspaper. “It said, ‘vote leave, take back control’, and a little imprint that said ‘paid for by the DUP’. That was very curious. Why was the DUP advertising in Sunderland?”

That led him to other DUP-paid ads in England and Scotland, and ultimately to the discovery that the party had received a donation of £435,000 for its Brexit campaign, a figure that dwarfed its expenditure in any previous electoral contest in its history.

Geoghegan believes the money was routed through the DUP to avoid breaking the cap on Vote Leave’s campaign spending in Britain by taking advantage of Northern Irish electoral law, which preserved the anonymity of political donors. (Vote Leave and the DUP both dispute this without offering an alternative explanation.)

“And that really was the thing that started me going. Well, how does money work in British politics?” says Geoghegan. “Is it possible to spend half a million pounds and nobody knows where it comes from? And it turns out it is. Now I’ve written an entire book, and I still don’t know where the DUP money has come from, but I hope I found some other interesting things out.”

The Northern Irish loophole has now been shut, but not before it served its purpose. And it was entirely legal. In fact it’s understandable that Leave campaigners used any means at their disposal. They were, after all, up against the prime minister, the City, most leaders of industry, the trade unions and the majority of the country’s intellectual and financial elites.

“Yes, that’s a point I make in my book, the way the British establishment was behind the Remain campaign,” says Geoghegan, who is also at pains to point out that none of the strategies deployed by the Leave campaign would have worked had there not been a genuine popular backlash among voters for them to latch on to.

“And you’re totally right. A lot of the stuff that I write about, more often than not it’s perfectly within the rules. The problem actually is that the rules are designed almost to not be followed. I compare it to the tax system. If you’re really rich you pay almost no tax. You know how to work the system.

“So in Britain the official Leave campaign was found to have broken the law during the referendum, but it only got fined £20,000 because that’s the maximum fine you can get.”

Geoghegan contrasts that situation with the US, where people actually get sent to prison for breaking electoral laws.

“That doesn’t happen in Britain and it doesn’t happen in Ireland either,” he says. “I think we’ve got used to a system where we think that everyone will play within the rules. That probably was the case for a long time. But now more and more what we’re seeing is people pushing the rules further and further because they know they can get away with just breaking them outright.”

America, of course, is where we see the power of political money in its rawest, most brutal form. Billions of dollars will be spent in this year’s presidential elections. The sums involved in the UK are a tiny fraction of this, which means it’s possible to have a highly significant impact at a relatively low cost.

“In Britain if you spend a quarter of a million pounds you can have huge influence, far more than you would do with a similar donation probably anywhere else,” says Geoghegan.

Much of Democracy for Sale is devoted to tracing the connections between obscure but often highly influential right-wing think tanks and political pressure groups pushing a vision of a Britain freed from the burden of EU regulations and turning towards a strategic partnership with the US instead. None of these groups are required to reveal who they are financed by.

According to Geoghegan, the influence of these think tanks has been out of all proportion to their size, although he also thinks they have lost their way recently.

“You’re seeing it on both sides of the Atlantic in libertarian capitalist thinking. They’re on the back foot in America. While they’ve done very well in terms of getting Brexit to happen, and they still are clinging on to this idea of a buccaneering global Britain, the reality is what people voted for looks to be very different from that. And there’s an intellectual crisis I think at the heart of it.”

Meanwhile, changes in communications technology have enabled the rapid rise of new sorts of political parties, such as Five Star in Italy and Nigel Farage’s Brexit Party in the UK, populist movements built around a strong leader and using the organisational techniques of the internet age.

Very little of all this is properly regulated. Geoghegan points to two paragraphs buried in the middle of the recently published 50-page report into Russian interference in British politics.

“They say that when it comes to democracy in Britain, there’s no agency of government in charge of making sure that the democratic process in Britain is safe and secure. There’s lots of different government bodies, things like the electoral commission, government departments, the defence community, which should have some sort of say in it.

“But actually when it comes down to the crunch there’s nobody actually looking at the health and the state of British democracy, whether that’s disinformation campaigns online or spending money and gaining influence by influencing politicians.”

Small amounts of money judiciously applied to individual politicians; cost-effective anonymous donations to think tank “experts” who get disproportionate media exposure; unregulated and highly targeted social media campaigns that play on people’s fears: These techniques and others form part of the invisible web of financial influence that Democracy for Sale describes.

Is there anything to prevent any of them happening in Ireland?

“I had a little bit of a look around Irish donations as well,” Geoghegan says. “To be honest, the Sipo [Standards in Public Office] registration data is really, really hard to work with. I look at it and go, ‘this makes no sense: political parties declaring nothing. What’s going on there?’ A lot of the rules around political donations actually look more opaque than they are in Britain.”

He thinks the cumbersome Irish system of reporting political spending may actually have made the situation worse than it was previously.

“There’s almost less clarity for people who want to go out and see where politicians are getting money from. I’m not an expert in it, but I can see similar themes in Irish politics that you see in Britain.

“I know there’ve been conversations in Ireland about having a proper electoral commission. I was really struck when I did some research around some of the referendums just how little information comes out. It’s just so opaque and confusing.

“There’s lots of different agencies supposedly with some oversight. And what happens then is lots and lots falls through the cracks. So Ireland is in no way immune from some of the things I’m writing about.”

Democracy for Sale: Dark Money and Dirty Politics is published by Head of Zeus

Listen to Hugh Linehan’s interview with Peter Geoghegan on the Irish Times Inside Politics podcast, irishtimes.com/podcasts/InsidePolitics